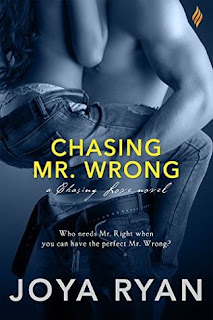 Who needs Mr. Right when you can have the perfect Mr. Wrong?

Ryder Diamond-the town's golden boy-doesn't have time for taking chances, let alone love. Against his better judgment, he lets his buddies set him up on a blind date with a girl who's only passing through town. But temporary or not, Whitney James sets fire to desires he can't control.
Before they know it, Ryder and Whitney are in a supply closet, drowning in lust. She's only in town for the summer-what better way to spend it than in the arms of Mr. Perfect? Except, she's wild and free, and he's Mr. Stability. Which means he may as well be Mr. Wrong.
And her new job? It's with Ryder's sister.

Sex and the inability to keep their hands off each other are the only things they have in common. But this little hook-up has "disaster" written all over it...and the only way Ryder can save his reputation is by avoiding the sweet little firecracker who could ruin it all.

This is the fourth book in the Chasing Love series by Joya Ryan. I would categorize this as an extra sexy romantic suspense.

Ryder has a ton of responsibilities since his last name is the same as the town’s. He feel like everyone expects perfection from him. He can’t make a mistake. He can’t take time for himself. The weight of what everyone expects is like a ton of bricks and it is causing him to become hardened before his time.

Whitney is the polar opposite of Ryder. She is a tumbleweed. She has no expectations. She has no one putting pressure on her but herself. She is alone in the world. While Ryder’s cup is full to the top with friends, family and responsibilities, Whitney’s is nearly empty.

They end up needing each other more than either of them know.

She is only looking for a one night stand. And in the beginning so is Ryder. But as we know, the more you get to know someone, the more things change, feeling morph and suddenly you wonder how you ever lived without them. But Ryder’s responsibilities are still pulling at his mind and they cause a lot of conflict between the couple.

I thought this was a great book. Lots of growth for the characters. Lots of conflict internal and external. Just the right mix of sexy and romantic suspense. Just an excellent guilty pleasure read.

I purchased this book with my own money.
Posted by Toni at 10:13 AM