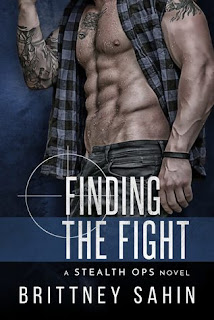 Goodreads synopsis:
Their well-kept secrets are about to unravel.

Former CIA officer Jessica Scott and Navy SEAL Asher Hayes have worked together for years as part of a black-ops team for the president, but Jessica's close encounter with death is about to change everything between them . . .

As the team hunts down her abductor and tries to prevent an impending attack, Asher will stop at nothing to protect the woman he cares about. But will his actions push Jessica, aka the Ice Queen, further away; or will he knock down her impenetrable walls?

With their pasts coming back to haunt them, and their insatiable desire for each other pushing them to the brink, Asher and Jessica will find themselves faced with impossible choices--ones that could topple their very world.

In this high-stakes mission, will they be able to find the fight inside of them to win--or will this be one mission that hits far too close to home?

The Stealth Ops Team - Navy SEALS who handle covert ops for the president in the U.S. and around the world - under the guise of an alias, Scott & Scott Securities.

*Each book in this action-packed romantic suspense series can be read as a standalone and begins with the recruitment process for that particular SEAL.

This is the third book in the Stealth Ops series. I skipped over the book about Owen to read this one. I am sure I will get to that book soon but I was intrigued by Jessica and Asher. I kept picturing Jessica as a version of Jennifer Garner from Alias but then later realized the Alias lady would be another character named Emily. I am sure I will pick up her and Liam’s book after this one. Alias is one of my all time favorite series. Is it any wonder I am intrigued by this?

Sahin has the unique ability to get us into the mind set of both male and female lead. Sometimes that is hard to do if you are reading a series one book after another. The characters are very relatable. You get comfortable in their skin. You worry for them. You care about what they care about. You root for them. That is not a quality I see in all books of this type. I am invested in knowing what is going on with all the members of #BravoTeam but each new story drags me further into the drama. I liked learning the backstory of Jessica and Asher. They had both been struggling with the attraction for six long years. But when Luke went off on maternity leave it pushed Jessica and Asher to work more closely together.

This is not a story about people without issues. They have TONS of issues, each of them. How can they not doing what they do for a living. But they have learned to compartmentalize. Well, Jessica did. Asher’s way of coping was to either beat the crap out of someone or let them beat the crap out of him.

This entire series just intrigues me and make me want more. I am glad I have two more books in the #BravoTeam series. And I look forward to the #EchoTeam books when they come out.

I purchased this book with my own money.
Posted by Toni at 8:51 AM