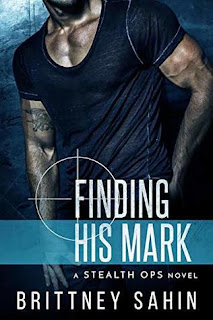 Goodreads synopsis:
She's crashed the biggest party of her life, and she's about to pay the price.

As the leader of an off-the-books black ops SEAL team, Luke Scott can't afford for anyone to discover the truth about who he is or what he does. But when a critical mission gets botched by a member of an iconic Hollywood family, he'll have to fight to protect his team's identity, as well as keep himself from falling for the woman who's turned his life upside down.

Eva Sharp's the writer and co-producer for the hit TV series SEAL Security. While on break from filming, the last thing she expects is to end up in the middle of a real-life action scene--one that puts her life on the line. At first, she's not sure if she can trust this stranger in the mountains, even if he has military written all over him. But the more time she spends with him, the harder it is to fight the pull of attraction, without also jeopardizing his op.

They'll soon realize not everything is as it seems, and Luke will be forced to discover how far he's willing to go to find his mark.

This is the first book in the Stealth Ops series. Luke Scott is on a mission and he is using a remote cabin to become bait for a bunch of bad men. Enter Eva Sharp. She is s script writer for a SEAL based tv series and she is escaping to her family’s cabin to escape for a time. It didn’t matter to her that her tenant wanted to be alone in the remote location. There were two cabins and he was acres away from where she would be. Turns out her presence puts a huge thorn into Luke’s mission and sets his op in a totally different direction.

This book was quite interesting. I like the whole secret Bravo team vibe. All the members stood out even though the story wasn’t about them. There are quite a number of sexy scenes but the story isn’t overcome buy them. Characters grow in this story and that is not common in a book like this. Once the two of them are put on this path, their roads in life will never be the same.

It seemed in the beginning Eva was totally blowing Luke’s op but in the end it was his saving grace. He had to make his own decisions and change his by the book attitude to get the job done… not only by means of the mission but in order to dive into his growing feelings for Eva.

I totally liked this. It was in my reading sweet spot. Covert ops, romantic suspense and a love worth fighting for. I have already picked up the other three books in this series. FINDING JUSTICE, FINDING THE FIGHT AND FINDING HER CHANCE.  The author also mentioned on Twitter than Wyatt from #EchoTeam would get his own story too and I look forward to diving into those future books.

This is romantic suspense at its best. If you love this sort of stuff as much as I do, definitely pick this title up.