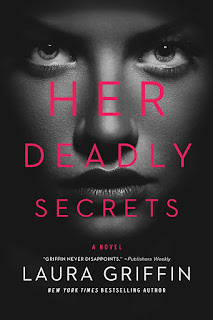 Goodreads synopsis:
Private Investigator Kira Vance spends her days navigating the intricate labyrinth of Houston’s legal world, and she knows all of its shadowy players and dark secrets.

On a seemingly normal day, she’s delivering a report to her top client when suddenly everything goes sideways and the meeting ends in a bloodbath. Twenty-four hours later, the police have no suspects but one thing is clear: a killer has Kira in his sights.

Fiercely independent, Kira doesn’t expect—or want—help from anyone, least of all an unscrupulous lawyer and his elite security team. Instead, she launches her own investigation, hoping to uncover the answers that have eluded the police. But as Kira’s hunt for clues becomes more and more perilous, she realizes that she alone may hold the key to finding a vicious murderer. And she knows she must take help wherever she can find it if she wants to stay alive.

This is the second book in the Wolfe Security series. This is a sort of male-driven romantic suspense book. I am not sure the title really fits the story, though. The synopsis only mentions the female lead but the series is called Wolfe Security so you’d think they would take a moment to mention which Wolfe Security guy this book is featuring. Book 1 in this series is titled Desperate Girls.

The story starts off as a split lead. First we get the entrance scene of Kira Vance a private investigator who witnesses the death of her colleague, Ollie and then it is quickly followed by the entrance scene of Jeremy Owens. He is coming off another job and has not had adequate sleep or even debriefed before they pull him in as a bodyguard to Kira. Then the POV moves to a more overreaching one where you see what everyone is doing only focusing on Kira or Jeremy alone here and there.

Kira is not the most agreeable client for Wolfe Security. She wants to find out what happened to Ollie and she is willing to break laws and into Ollie’s home to get clues much to Jeremy’s dismay. They get caught by the police and somehow quickly let go. But Kira dives into other not so legal means to find information. Sometimes it is helpful to the investigation and sometimes it just lands her into more trouble. But she quickly gets under Jeremy’s skin making him think about doing things with Kira that would force him to give up his protection detail. Emotional things that might end up with both of them shedding clothes and doing inappropriate things.

I thought this was overall pretty good. I enjoyed all the suspenseful aspects. Kira proved to be quite hardheaded and she made an excellent female lead. Jeremy seemed the more strong and silent type but somehow he felt almost more present in the scenes than Kira. Quite an imposing character even when he wasn’t talking. I thought that said a lot about Griffin’s writing style. It would be difficult to make and character say nothing but still be quite imposing in the scene.

The sex scene wasn’t too over the top but I think the kiss in the car was much hotter in my opinion. Pair the intensity of the situation with their burbling chemistry and a spark between them was sure to burn to an engulfing emotional fire.