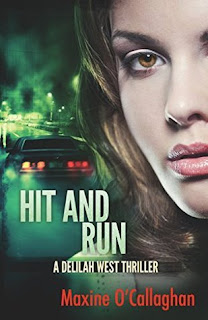 Goodreads synopsis:
Before Kinsey Millhone, before VI Warshawski, there was Delilah West, the tough-but-sensitive PI who shattered the boundaries of mystery fiction.
.
“Nothing daunts Delilah West and nothing short of a bullet between her ribs can stop her for long,” Los Angeles Times

The PI business has been hard on Delilah West over the last year. Her husband and business partner was murdered and her last case left her with a broken arm, cracked ribs, and big medical bills, forcing her to moonlight as a waitress to pay the bills. As if that wasn’t bad enough, she’s jogging on a rain-slicked road when a speeding Trans Am clips her and mows down an old man. But things take a bizarre turn when the driver’s mother hires Delilah to clear her teenage son of the hit & run killing that Delilah witnessed. Or did she? Nothing is what it appears to be in a twisty, deadly case, that could end with Delilah as road kill.

This is the third book in the Delilah West thriller series.

Delilah West is not the PI who makes a ton of money. She is living less than paycheck to paycheck. She is barely feeding herself and working 24/7 on a job that is not making her any money. She was the witness to a hit and run. Later it is revealed that there was more to this hit and run than it seemed. The victim had been dead long before the Trans-Am ever ran over him.

The farther Delilah delves into this mystery, the more she finds herself in danger. Along the way she meets a court appointed lawyer named Matt who turns out to be not only a friend but someone she can turn to in her times of need both emotionally and physically.

I thought this was a great book. The suspense and thrills were there. It was nice to see the integrity of the good characters as they reflected against the bad guys. So refreshing.

Since this book was first published in 1989, there are references to pay phones which are no longer a part of the current culture in the 21st Century. A revise might be in order if the author plans to keep selling this title on Kindle. But definitely worth the money. Pick it up and judge for yourself. One great read!