Mister Black (In the Shadows #1) by P.T. Michelle 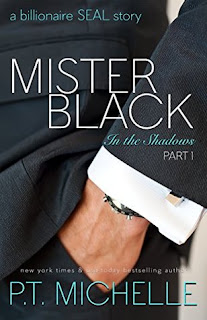 Mister Black
(In the Shadows #1)
by P.T. Michelle

Goodreads synopsis:
We all have someone who crossed our path and fundamentally changed us. That one person who blew through our lives, their presence forever stamped on our psyche. They linger in our thoughts, in our hearts, and in the decisions we make. A soul crusher or a dream maker, depending on the perspective.

He is Black: a deadly enforcer and masterful seducer.
I am Red: a justice bleeder and willing participant.
Together we are passion. Colors colliding through each other’s lives.

When our secrets converge in a passionate encounter, stepping out of the shadows just might be worth the risk.

Talia didn’t know sneaking into a masked party to land a story for her local college newspaper would introduce her to a mysterious stranger named Sebastian. He is dark and demanding. He was also the boy who helped her when she was twelve and in a desperate position.

They have one fateful night of steamy sex and then it was over. When she learns he was a SEAL and being deployed that day, she merely observes him as he leaves. He doesn’t know her name or even the real color of her hair.

This was pretty good but I wish it had been longer. I hated Talia had to lose her sister and mother in such a terrible way and that those left behind were involved in drugs. The night she met Sebastian her life had come to a convergence point. And nothing would ever be the same again.

This story is basically the prologue to books two and three: SCARLET RED and BLACKEST RED.

I purchased this book with my own money.
Posted by Toni at 8:34 AM