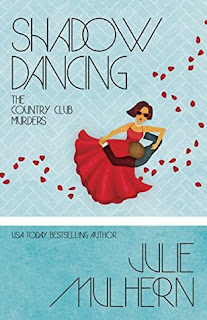 Goodreads synopsis:
Visiting a psychic is outside the norm for Ellison Russell. Finding bodies is not. Unfortunately, the psychic’s crystal ball says she’ll soon be surrounded by death. Again.

Now there’s a corpse in the front drive, a witchy neighbor ready to turn Ellison and her (not so) little dog into toadstools, and a stripper named Starry Knight occupying the guest room.

Ellison must handle Mother (who’s found a body of her own), make up with a certain handsome detective, and catch a killer, or the death surrounding her might be her own.

This is the seventh book in the Country Club Murders series. You don’t need to read this series in order but know going in that this is set in the past: 1975 Kansas City. And Ellison is always finding dead bodies that seems to appall all of her country club colleagues. We can actually blame this whole trend on Ellison’s dead ex-husband. He started it, after all.

Ellison Russell started 1975 with a new resolution: no more dead bodies. It is really beyond her power at this point. The fortune teller has spoken. Her daughter is in danger and The One, aka Detective Anarchy Jones, is nearly out of her reach. What’s a girl to do?

Even Ellison’s mother is getting in on the “finding a dead body” gig. It was just a pile of cremated ashes in a box but for Ellison’t mom it might as well have been an actual bleeding dead body in her hall closet.

Ellison’s best friend, Libba takes her to a fortune teller on the more seedy side of town. While  leaving there she nearly runs over a teen who darts out in front of her car. The girl is scared and has no coat in the dead of winter. The girl refuses Ellison’s request to take her home. So, Ellison does the only thing she can at the moment… she gives the girl her navy pea coat off her back and a slip of paper with her name and phone number. Later when Anarchy’s partner Peters comes knocking on her door, she learns the girl is dead. Anarchy doesn’t actually make an appearance till about 20% into the book.

This accidental brush with a girl who ends up being a teen prostitute figures into the whole scenario behind the plot of this book. This, the fact her mother has her searching the last four months of obituary pages  for the identity of the ashes/remains she found in her hall closet and it makes this whole story quite a page turner.

Anarchy stays overnight on the couch on three separate occasions to keep her safe and I am not sure how Ellison managed to maintain control of her emotions during those times. There were quite a bit of fainting scenes in this story too. This is by far my favorite story in the Country Club Murder series. The only problem I have is that the woman never seems to be alone…. ever. Someone is always coming over or calling. How can a girl get some quiet time with her detective if no one will ever leave her alone?

A thrilling, roller-coaster ride. Just a lot of excitement all around. Pus, this book has so much Anarchy I was positively drooling. Anarchy has definitely attained book boyfriend status for me.

I received this as an ARC (Advanced Reader Copy) in return for an honest review. I thank NetGalley, the publisher and the author for allowing me to read this title.
Posted by Toni at 7:28 AM