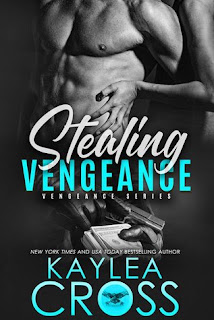 Goodreads synopsis:
She’s an expert at getting into places she doesn’t belong.

The government created Megan, transforming her into a Valkyrie—a deadly operative only whispered about in certain circles. They took everything from her and made her into a weapon. Now someone is leaking secret information about her sisters-in-arms, betraying them for money. Loyal Unto Death is the Valkyrie motto. So when Megan is recruited to find who leaked the files, she takes the high-risk assignment. Even if it means working with the man who betrayed her trust long ago. Even if it means giving her life. Because she’ll do whatever it takes to find justice.

But this is one situation she can’t escape from on her own.

Tyler Bergstrom never forgot the resourceful woman who escaped during the toughest phase of SERE school. So when he learns the stunning truth about her and his unwitting part in her past, he volunteers to work alongside Megan for a chance at redemption. Except she doesn’t want a partner. Doesn’t want to let anyone into her life, including him—hell, especially him. Yet whether she likes it or not, for this mission they’re partners. Now it’s a race against the clock to bring down the shadowy figure targeting Valkyries. But the threat goes deeper than they ever imagined. No one is safe. And if they can’t overcome the past and learn to trust each other, they’re both dead.

This is the first book in the Vengeance series by Kaylea Cross.

This story focuses around a group of elite women who have been trained from a young age by the government in all manner of different skills. This features Megan who has trained since she was taken from her foster home at the age of five.

Megan has never had a serious relationship and when a covert team approaches her she agrees to help them find the person who is spilling the information about the Valkyries to their enemies and thus causing their death. Megan is assigned a partner named Ty who had been a fill in instructor in her SERE school training. She has a problem with him because during her training he gave her food and then turned her in not knowing by doing that she was beaten and punished. He wants to apologize and this is why he has taken the assignment to be her partner.

This story is called a standalone but it has its beginnings in other books by Cross. I like the whole concept. Intriguing. I thought this book was good. I liked the interaction between Megan and Tyler but the team as a whole was outstanding too.

Be aware this is much more covert mission than romance. So if you are in it just for the romance, you may come away disappointed.

I received this as an ARC (Advanced Reader Copy) in return for an honest review. I thank NetGalley, the publisher and the author for allowing me to read this title.
Posted by Toni at 7:02 AM