Still Not Love by Nicole Snow 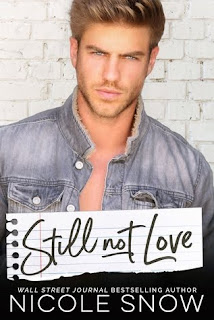 Goodreads synopsis:
Not him. Not now. Not the hell again.
But I need a hero fast...

I'm about to go nuclear.
Yet I have to smile and pretend I won't slap him into the next century.
James Nobel and I have history.
The raging hearts, dueling kisses, nights on fire kind.
A man like him breaks laws with that suit and that smirk.

So how could I ever forget my first?
Or pelting an Adonis with crumpled love notes in class?
We were young and dumb and lied about forever.
Spoiler alert: he did the lying. Then he disappeared.

Maybe I always wanted to know why, but not like this.
James, my personal bodyguard.
James, my flipping bunkmate in a luxury cabin for newlyweds.
James, who still makes me crave one more night of bad decisions.

Worse, we're snowed in with my very important father and his enemies.
It's a date with chaos. Plus every question I swore I'd never ask again.
What if there's more to us than scalding banter and get-bent glares?
What if there's still - do I really have to say it - love?

Nicole Snow has a great ability to ramp up the sexual tension, dive into each character’s true heart and spill it out on the page for us. I was intrigued by James in the previous book in this series. He seemed part spook, part ghost and part vampire. He also didn’t seem to sleep. He had Spock-like emotions and was invisible when he wanted to be. I was intrigued.

The emotions were complex here. It spanned a lot of years. James hadn’t told his Enguard employers about his previous stint in the FBI or the fact that he believe Senator Harris had not only sabotaged his plane five years earlier but was responsible for his own wife’s death. James had kept his suspicions from Faye, his girlfriend and Senator Harris’s daughter. He had no proof. So he left and  never returned. Glutton for punishment much?

The book starts out with Senator Harris whisking his daughter away from her job as a librarian in order to supposedly protect her. Her father had forced her to resign from the FBI where she had been an explosives expert. She not only had lost the man she loved five years earlier but also lost the job she loved. Life sucks sometimes.

Now James is put in place to protect Faye. Enguard Security has been enlisted to pair with another security agency to keep a certain fundraiser in the mountains safe. Enguard doesn’t know about his past with the senator and his daughter. He tries to have his protection detail changed but it is set in stone kind of like James’s icy demeanor. Question is: will James finally crack the ice of his heart?

I thought this book was excellent. Right in my sweet spot. A grand protector, a gal who can hold her own against the bad guys and a love that is worth fighting for. I was hooked from the first page. Nicole Snow knows her stuff when it comes to romantic suspense. This book had a fun Peter Pan theme going. He called Faye Tink and the bad guy was Hook. I had a waffling idea of what I thought James looked like. It went between Daniel Craig and the well dressed guy from Lucifer. I am not sure why I couldn’t see James as a blonde. I think my mind was set on tall, dark and handsome.

The mystery was pretty convoluted and why wouldn’t it be. Anything with a hint of government oversight is just a mess of red tape most of the time. I thought the mystery was compelling and the tension between James and Faye was just the right mix of torture and angst. If they got together immediately, where would the fun in that be?

I think what sets this apart from many ebook romances is that it is a normal novel length book. The author has the ability to really give you a LOT of details about everyone and ramp up that tension and suspense naturally. Just an excellent offering of all the things that make a romance great.

I purchased this book with my own money.
Posted by Toni at 7:42 AM