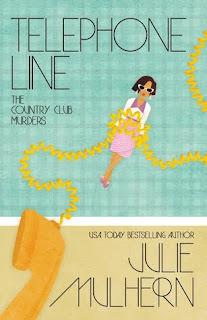 Goodreads synopsis:
A killer is calling, and Ellison’s life is on the line.

Ellison Russell is planning the event of the season—and she’s stressed. Why not yoga?

Because the yoga instructor gets murdered during class—and Ellison’s stress level rises exponentially. Now, in addition to raising a ridiculous amount of money, she’s babysitting a deranged cat (named after the devil himself), taking ten million phone calls (most of them from Mother), and finding more bodies (they’re popping up like dandelions after a spring rain).

There’s no such thing as balance when the killer makes it personal. Can Ellison catch a murderer or will her next namaste be her last?

This is the ninth book in the Country Club Murders series. If you haven’t read this series, it is set in the past. 1975 Kansas City to be exact. This is the time before cell phones and the internet. And the only way you could put someone on hold was to put down the phone receiver and walk away. Things were supposedly easier back then

Ellison Russell gets blamed by her mother in every book that she needs to stop finding dead bodies. In truth, she is not always the one who finds the body but instead alerts her best friend, crush, boyfriend, Detective Anarchy Jones about the situation.

I have to admit right at the start… there is not enough Anarchy in this book. There is never enough Anarchy for me. I am Team Anarchy. I may be a team of one, but I root for him. The man has been waiting nine freakin’ books to get a bit of nookie from Ellison and it has not happened yet. Give a girl a break. We need to see some Anarchy/Ellison nookie. The end does promise that in book ten but I wonder if Mulhern is just teasing me. I am tempted to write Anarchy/Ellison fan fiction just to get my fill. :) Yes, I’m obsessed.

But I digress. Back to the bodies. There are a heck of a lot of bodies in this book. Way more than you usually see in a Country Club murder book. Everybody and their brother dies in this book. Like the multiple dead bodies weren’t enough to rattle Ellison, her mother is tormenting her to raise a million dollars for a charity event. The woman had already met the goal set by the museum of the event. I sometimes just want to reach through the pages and slap Ellison’s mother for being such a butthead.

I thought the mystery of this was pretty good. It twisted and turned. Ellison sure didn’t follow Anarchy’s advice to “stay out of it.” This is a pretty regular request of him. She was over involved in the search for the killer in this book it seemed.

As I read books I like to try and figure out who the author pictures as they create the different characters. I feel like Anarchy is a lot Steve McQueen with accents of Dennis Weaver, James Garner and Peter Falk. Ellison feels to me like a combo of Adrienne Barbeau, Jacklyn Smith and Lindsay Wagner.This is just me. I am sure everyone has their own ideas of how to picture these figures. I have thought about this way too much, if you can see. Didn’t I say obsessed?

I am hopeful for more Anarchy and Ellison getting together in book ten. Haven’t we waited long enough, dang it?

All in all, this is a great series. It will hook you immediately. Check it out. Cozy mystery at its best. Nothing else like it out there.

I received this as an ARC (Advanced Reader Copy) in return for an honest review. I thank Edelweiss, Henery Press and the author for allowing me to read this title.