The Dragon of New Orleans by Genevieve Jack 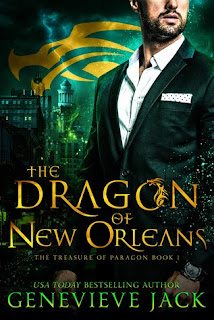 A deadly curse....
For 300 years, Gabriel Blakemore has survived in New Orleans after a coup in his native realm of Paragon scattered him and his dragon siblings across the globe. Now a jealous suitor's voodoo curse threatens to end his immortal existence. His only hope is to find an antidote, one that may rest in a mortal woman.

A lifesaving gift...
After five years of unsuccessful treatment for her brain cancer, death is a welcome end for Raven Tanglewood. Her illness has become a prison her adventurous spirit cannot abide. Salvation comes in the form of Gabriel, who uses dragon magic to save her.

A harrowing price...
To Raven, the bond that results from Gabriel's gift is another kind of captivity. Can Gabriel win Raven's love and trust in time to awaken the life-saving magic within her? Or will his fiery personality and possessive ways drive her from his side and seal his fate?

This book was right up my alley and I am not a person who reads a lot of shifter/human to dragon type romantic suspense books.

The reason I picked this up is that I am involved in a Harry Potter-themed reading and cross-stitching Facebook group where we are awarded points if we complete certain prompts. This month one prompt was to read a book with a dragon in it. I figured this book would apply and picked it up. And I was definitely not disappointed.

This book sparkled with magical dragon energy, You could literally feel it sizzle through the pages and tingle on your fingertips. The sexual tension and fire between Raven and Gabriel was astounding. How the author depicted Raven’s glowing skin with the words of magical spells written across her body just brought each scene between her and Gabriel alive. When Gabriel touched her, she would glow in this way.

And the plot was pretty compelling too. Cursed dragon prince sent to Earth to supposedly save him from his uncle who had overthrown the new ruler (Gabriel’s brother) and chopped off his head. Now Gabriel is next in line for the throne. But an evil Voodoo Priestess has cursed him to get him to supposedly sleep with her. But she is really after his immortal dragon powers to keep her alive for many more centuries. The demons she has currently been working with are not helping her as much as they used too. Their magic is stale and she needs fresh blood in the form of a dragon prince to remain alive.

Gabriel needs to find a way to break the curse and time is running out. He only has until Mardi Gras to fix the flaw in the ring his mother created to allow him to stay in this dimension. If it fails, he will turn to stone. I was just riveted from page one.

I have already picked up the next book in the series featuring Gabriel’s brother, Tobias. I hope he is a bit more open in that book than he was in this book. But looking forward to the read.

Genevieve Jack is a new author for me and I have to say that I was impressed with her story. Thank you!