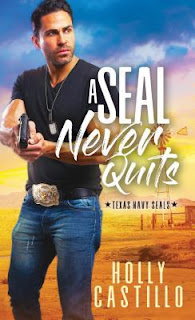 Goodreads synopsis:
A SEAL is ready for anything...except losing his heart...

Lieutenant Amador "Stryker" Salas and his tight-knit Navy SEAL team are undercover on a Texas ranch and tasked with covert ops across the border. It's an assignment that requires all their skills, all their secrets, and all their know-how.

Anya Gutierrez, the local veterinarian, has been serving the ranch for years. She loves the animals and ranching life, and Stryker finds her a breath of fresh air in his otherwise rigidly disciplined existence.

When Anya gets caught in the crosshairs of a mission gone sideways, Stryker must tell her the truth about who he really is, risking everything to keep her out of harm's way, even if it destroys him...

This is the first book in the Texas Navy Seals series by Holly Castillo.

First off, this book was pretty good. I liked the overall story, romance and mystery. But this book does what many romances do which is a pet peeve of mine.  It keeps telling us over and over how much they each want each other even though they have just met each other and know nothing about each other. Please just show and don’t tell. I was cringing at all the cliche words they kept telling themselves in their mind and muttering to people around them. It was kind of annoying and really this book was better than that. It didn’t need to rely on such tactics to get us interested in the romance.

Then there is the whole circumstance around the base of operations where Stryker and his team find themselves. They have the best of the best tech and yet still someone gets into the compound and takes photos of them all. I kinda find that hard to believe. Stryker had a bit of Spidey-sense at the ladder half of the book and I figure if someone had been watching all of them that someone might have sensed something during that time as well. Not to mention the whole identity of the photographer was left hanging at the end of the book. I guess that is going to be used in book two of the series which I assume will be the book of Phantom and Elaina.

Basically, the story is about a group of Navy SEALS are on a mission to take down bad guys in Southern Texas, Mexico and South America. Particularly this is focusing on a drug cartel called the Scorpions. They are pretty new to the scene but have quite a good cyber/hacker guy who had put them above the rest. The SEALS plan to infiltrate this organization and take them down.

Anya Gutierrez is the local vet for all the cattle and animals. She meets Stryker when one of his animals is having a difficult birth. When Anya and Stryker meet it is pure magic and they quickly decide they can’t stay away from each other.

This book is a happily ever after… for now type of read. If you like like your romantic suspense with more romance than suspense, then check this title out.