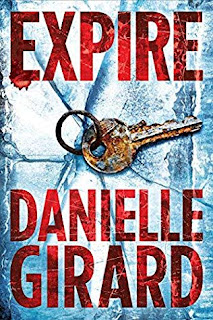 Goodreads synopsis:
Alone, held captive, and left in the dark, a woman’s worst fears come true in this gripping thriller by the award-winning author of Expose.

San Francisco medical examiner Annabelle Schwartzman has spent eight years looking over her shoulder. Stalked by her vengeful ex-husband, Spencer, she’s always known they’d meet again. Has her nightmare come true? Abducted, blindfolded, yoked, and tethered, she’s being held prisoner in an isolated cabin in Idaho. But it’s the unknown that terrifies Annabelle now. Because the man’s voice in the dark, though eerily familiar, is not Spencer’s.

Annabelle’s partner and lover, Inspector Hal Harris, knows in his gut that Annabelle’s disappearance is tied to the past. Except Spencer is fifteen hundred miles away. To save Annabelle, Hal is tracking every move Spencer makes. But is it drawing him closer to finding Annabelle? Or is it luring him farther from her desperate cries for help?

As a cruel game of retribution begins, Annabelle must rely on her wits, her will to survive, and a plan of escape. But time is running out. And her captor’s three chilling words make her fear that the worst is yet to come: sweet dreams, Bella.

This is the fourth book in the Dr. Schwartzman series. Since it is obvious from the beginning that the previous book in this series ended on a cliffhanger, it would probably be best if this series was read in order. I found it hard to get into and was doing quite a bit of skimming to see if I could figure out what was going on. I really needed that three book backstory for this to make any sort of sense for me.

The book starts off with Annabelle Schwartzman, San Francisco’s medical examiner has been kidnapped by someone whom she thinks initially is her ex-husband then believes to be her morgue assistant Roy. Inspector Hal Harris gets involved from the beginning. He found some pregnancy tests in her bathroom showing a positive result. So he is even more focused on finding her alive. He wants her and her unborn baby to be safe.

Annabelle is being held in some sort of cabin and it must be winter since it was snowing and she was saving snow to melt for drinking water since every kind of food or water was being drugged. How much would a set up like that cost to maintain, jeez. Just the drugs alone would have been costly. Even the shower was laced with the drugs. Hard to believe.

Based on reading other reviews it seemed to them like this book might have been written by another writer’s perspective of this universe. The mother of Annabella behaved differently than in previous books and Hal had been reduced to a crybaby. I think I should read the previous books just to get a better idea of characterization. There are also people introduced in this book for no reason at all. Storyline threads are left dangling with these unused people. Maybe they will be fodder for future books, I don’t know.

I really couldn’t get into this book. I wanted it to be thrilling but it fell flat for me I am sorry to say. I think I will definitely pick up the previous three books just to lay the groundwork for any future books I may pick up. I encourage you to read books 1-3 in this series before diving into this one. It will save you some mental pain in the future.

I received this as an ARC (Advanced Reader Copy) in return for an honest review. I thank NetGalley, the publisher and the author for allowing me to read this title.
Posted by Toni at 12:55 PM