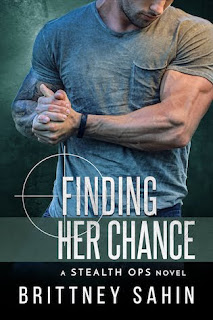 Goodreads synopsis:
A drunken night in Vegas led to an accidental marriage... and a vow he’d die to honor.

An elite Navy SEAL and one of the world’s best snipers, Liam Evans lives and breathes his missions. It’s a simple — if not solitary — way to live, but it keeps his heart safe and his head in the game. But one night in Vegas with his beautiful friend destroys his one rule, leaving him at risk of falling for his own wife.

Emily Summers, a successful lawyer for the attorney general’s office, swore off charmers with sexy accents and devastating smiles, and a weekend in Vegas isn’t going to change that. But when she and Liam meet to sign their it-never-happened annulment papers, the night turns deadly when an assassin takes aim at Emily.

Liam and Emily soon discover the hit is related to both of their jobs and an op involving an eight-year-old super genius with a ten-million-dollar bounty on her head.

Caught between searching for answers and growing threats while trying to keep a young girl safe — Liam and Emily must also face their mounting desire for each other, as well as confront past pains.

Fate may have tied them all together, but if they want a chance at a future, they’re going to have to fight for it.

This is the fourth book in the Stealth Ops series by Brittney Sahin.

First off… this book was awesome! I mean, the whole series just clicks all the buttons for me. Love it. I love the group covert dynamic. I love them all opening up to relationships. I am just in love period. This just revived all the reasons I knew I loved romantic suspense. This is my guilty pleasure genre for sure.

In book two of the series, there is a big double wedding at the end where Owen and his girl (I haven’t read that book yet) and Luke and Sam get married. Well apparently on the same night there was a third wedding between ladies man, Liam Evans and Emily Summers. They were drunk and in Vegas. I guess it is just what you do there. Wedding mania is in the air or something.

When they wake the next morning Liam is called off to an assignment and is gone before Emily can ever get the phone number of her new husband. They even had sex multiple times and she can’t remember any of it. Bummer!

Separately they are both involved in the same task force. Emily is on the legal end and Liam on the extraction of a young 8 year old genius.

There is a lot of back and forth about will they annul the marriage or won’t they. But we know the more they get involved in each other’s worlds, the more they are invested to stay together. Liam is broken by his ex-finance leaving him at the alter and then marrying his brother! Emily has known since she was young that she would never have children and  then she was also tormented by the near death of her own Teamguy father.

The best part is the journey to love they find with each other. But know there is a section near the end where you will find yourself doing the ugly cry. This book pulls out all the stops.

This was an overall excellent book. My highest recommendation.

I purchased this book with my own money.
Posted by Toni at 8:29 AM