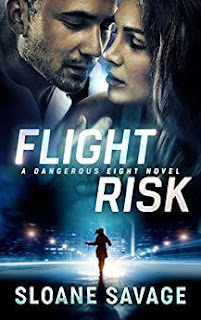 Goodreads synopsis:
When Haden Smith's well-connected boyfriend had her father killed, she knew her only way out was to run. Since then, she’s survived by staying on the move and trusting no one. Four years later and hundreds of miles away from her old life, a night out with work friends sets off a chain reaction no one could have expected. For just one night, she let herself forget the rules—and now she’s dealing with deadly consequences.

Night Club owner and ex-Army Ranger Christopher Drake is in pain. It's been months since his girlfriend was killed by a drunk driver, turning his world upside down. When, at his friends’ urging, he finally opens himself up to the possibility of meeting someone new, he encounters Haden--the only girl in his club who's not impressed by this sexy bad boy.

But even though Haden’s secrets threaten their growing attraction, Drake isn't without resources. Her fear ignites a spark in him that no amount of reason will subdue, and he’s convinced that he and his friends can help her escape her pursuers and stop running for good.

With both the Ortega drug cartel and the Russian Mafia after her, Haden will do anything to survive, but is she willing to risk it all to let Drake help?

This is the first book in the Dangerous Eight romantic suspense series by Sloane Savage.

Haden Smith is on the run. Her former boyfriend has ties to the Russians and a drug cartel plus his father is the notorious Butcher of Malta. When she tries to leave him, he torments her to the point he even has her father killed in order to make her stay by his side. She grab all her money, finds a way to have several fake IDs created and books it out of town and into the wind. The ex-boyfriend never stops looking for Haden.

Four years later she is still on the run. She finds herself in a club owned by Christopher Drake. He’s an ex-Ranger and still reeling from the death of his girlfriend whom he thought was “the one.” Now the two see each other and decide to step off the cliff into something new. When her ID comes up as fake, she has already left the club. Drake decides to go after her. He doesn’t want her getting away. What if she was “the one?”

This brings Drake and a lot of his ex-Ranger buddies, Vincent, Alex and Scott into a race to keep Haden safe from the drug cartel and the Russians who are targeting her.

This book was really exciting and the pulse pounding action never stopped. It took a while into the book until Haden felt safe enough to trust Drake and his Ranger buddies. Her distrust really went to her detriment when she caused a lot of her own misery by her actions. She did a lot of overthinking which I think could be a problem after four years on the run.

This story gave us a good overview of a lot of the Dangerous Eight Rangers. Book two will feature the FBI guy Scott and book three will be about Alex, the tech guy. I assume Vincent, mountain man/high society guy, will be book four. One can only hope. Vincent was the most intriguing of the guys featured in this book in my opinion.

Great story. I already read book two so now we wait for book three. Check out this series if you love romantic suspense. It is definitely a guilty pleasure read.
Posted by Toni at 9:46 AM