If She Wakes by Michael Koryta 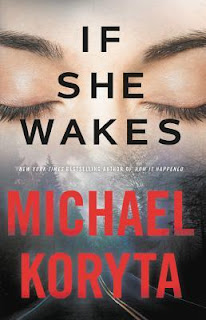 If She Wakes
by Michael Koryta

Tara Beckley is a senior at idyllic Hammel College in Maine. As she drives to deliver a visiting professor to a conference, a horrific car accident kills the professor and leaves Tara in a vegetative state. At least, so her doctors think. In fact, she's a prisoner of locked-in syndrome: fully alert but unable to move a muscle. Trapped in her body, she learns that someone powerful wants her dead--but why? And what can she do, lying in a hospital bed, to stop them?

Abby Kaplan, an insurance investigator, is hired by the college to look in to Tara's case. A former stunt driver, Abby returned home after a disaster in Hollywood left an actor dead and her own reputation--and nerves--shattered. Despite the fog of trauma, she can tell that Tara's car crash was no accident. When she starts asking questions, things quickly spin out of control, leaving Abby on the run and a mysterious young hit man named Dax Blackwell hard on her heels.

Full of pulse-pounding tension, If She Wakes is a searing, breakneck thriller from the genre's "best of the best" (Michael Connelly).

The basic premise is Tara Beckley is driving a professor to a conference when she finds herself in an accident that leaves her in a weird coma-like state where she knows what is going on around her but she can’t move or speak. A gal named Abby is hired to look into the circumstances around what happened to Tara and she finds that her accident wasn’t an accident at all.

This was very hard to get into in my opinion. The ratings on this vary greatly. Some loved it and others couldn’t relate. I think starting the whole thing off with what happened to Tara might have killed this novel for some people. I spent a good portion of the beginning wondering why I was even reading this. Nothing was sticking in my brain and I was left feeling empty.

Do not read this if you have a headache or are in any state where you are less than one-hundred percent focused. You need to pay attention to everything since there is so much going on and a lot to chew on visually. I had to reread sections in order to really grasp what was going on. I felt the author can say a lot with few words and sometimes that is overlooked if you are reading quickly or skimming.

There is a bit of a hate to love (as in hate to I don’t really want to kill you but I will) relationship wandering around in here. Call it the un-relationship. Not really a relationship but it reads that way.

A lot of people liked this. Called it pulse-pound. I just didn’t get it. Perhaps just not the book for me so don’t take my word on anything. Read it for yourself and see how it fares.