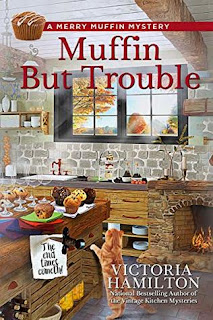 Kindle Edition, 353 pages
Published July 2nd 2019 by Beyond the Page

Goodreads synopsis:
In the new Merry Muffin Mystery from the author of Muffin to Fear, baker Merry Wynter must confront a spiritual guru who may be up to something far from heavenly . . .

With plans for a new performing arts center at Wynter Castle taking up all her time, baker Merry Wynter has been all but unaware of the fringe group compound near her small town—until a street preacher accosts her with taunts of doom and damnation. Worried that some of her close friends may have been lured in by the group and its charismatic leader, Merry begins digging into the ministry—and soon suspects they may have ties to the recent death of a young woman and the disappearance of many others.

With her rebellious teen friend Lizzie at her side, Merry steps in to confront the eerily submissive community and its misguided members, skeptical of their supposed spiritual leanings. When another young woman vanishes and Merry realizes the lives of people close to her are at stake, she will stop at nothing to uncover the group’s sinister secrets before the murderous ministry can strike again . . .

This is the sixth book in the Merry Muffin Mystery series by Victoria Hamilton. This is the first book I have read by this author but it was pretty easy to get caught up since they mention backstory here and there through the plot.

Basic premise: there is a religious cult on the outskirts of town. When one of the members calls Merry a jezebel she becomes concerned about her friends who might be taken in by this organization. Then they realize that a number of young women have turned up missing and a couple were spotted on the grounds of the suspect church. The more Merry digs into what is going on out there the more bad things she uncovers.

Then they stepped on the suspense quite often. No build up. It looked like the suspense was going to start and then… nothing. This could have been so much better than it was. There were leaps in logic scattered all over the story too. Plus, I really don’t think just based on Merry calling her hubby Virgil (a PI from what I gathered) that troops of police would come running and take down the bad guys. That happened a number of times.

Besides those structural problems the overall concept of the story was good. Since I missed a bunch of back story, I felt lost in regards to all the relationships around Merry. There was no conflict between any of them and I felt that was a bit unrealistic. Everyone shouldn’t just be a pawn in whatever mystery Merry is trying to uncover. And to me they felt more like pawns than players in the drama. If this happens, call Virgil. If this happens, call Pish.

It was a bit strange and disjointed but overall hit the mark with its story. I wanted more than it gave me but sometimes I don’t always get what I want.

I received this as an ARC (Advanced Reader Copy) in return for an honest review. I thank NetGalley, the publisher and the author for allowing me to read this title.
Posted by Toni at 7:26 AM