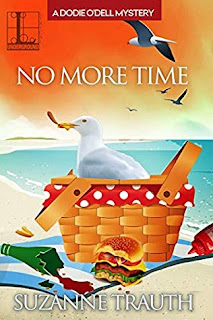 Restaurant manager Dodie O’Dell has found her niche in the cozy New Jersey town of Etonville, creating menus that make a delicious double-act with the community theater’s productions. Now she’s ready for a vacation at the Jersey Shore town she called home before a hurricane hit. Sun, salty air, and seagulls make for a nostalgic escape from regular life—until a contingent from Etonville arrives to compete in a Jersey Shore theater festival.

Roped into helping her former boss cater the event, Dodie also gets a visit from her old flame, Jackson, who’s hoping to revive his charter boat business and is looking for a place to crash. Before Dodie can tell him that ship has sailed, Jackson’s partner is found murdered on his boat. Dodie knows her ex is a mooch, but she’s sure he’s no killer. But as she follows a trail of evidence that leads into her own past, Dodie stumbles on a dangerous conspiracy theory that could bring the festival to a shocking finale…

This is the fifth book i the Dodie O’Dell Mystery series by Suzanne M. Trauth

This is a new author for me and I have to say I wasn’t disappointed. This was a fun summer read. Dodie O’Dell and her police chief boyfriend, Bill are Etonville for a much needed vacation from the stress of all the sleuthing she did in the four previous books. But as we know death doesn’t take a holiday and Dodie finds herself immersed in another mystery she must uncover.

Dodie’s former flame, Jackson shows up on her doorstep wanting a place to stay and makes an uncomfortable atmosphere when she and Bill just want to be alone and bask in the sun of a time away from everyone. But it seems nearly everyone has followed her on vacation and it is business as usual when Jackson’s former partner in a boat charter business ends up dead. Now Dodie must uncover the truth or watch Jackson go to jail for a murder she hoped he didn’t commit.

This was a fun jaunt into New Jersey culture. I found it quite entertaining and all the elements just seemed to naturally flow from one scene to the next. There were no cringe-worthy moments and that is always refreshing. I will definitely be checking other other Dodie books. This book really keeps you guessing and there is so much going on that it sometimes makes your head spin. But in a good way.

I received this as an ARC (Advanced Reader Copy) in return for an honest review. I thank NetGalley, the publisher and the author for allowing me to read this title.
Posted by Toni at 7:19 AM