Out of Luck (Maximum Exposure #3) by Kendall Talbot 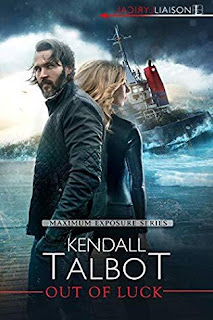 Out of Luck
(Maximum Exposure #3)
by Kendall Talbot

Goodreads synopsis:
A history made of questions—and a future worth answering for . . .

For twenty years, they moved from town to town every few months. They paid in cash. They kept only what they could carry. But 26-year-old Charlene Bailey and her father were a family, complete and happy. Until a woman stabbed him to death in a New Orleans café, right in front of Charlene’s eyes, screaming in a language she didn’t understand. Now the police are claiming that her whole life is a lie. To find out who she is, she’ll have to find out what they were running from. And to discover that, she’ll have to find someone she can trust . . .

As a charter boat captain out of Key West, Marshall Crow has seen his share of reckless tourists. But the fierce young woman asking for passage to Cuba isn’t one of them. He never thought he’d put the skills he learned in the Navy to work smuggling a stranger, but he’s drawn to her the same way she’s drawn to the truth. And through the dark waters of the Florida straits and the narrow streets of Havana, the danger that awaits them is far too vicious to face alone

This was the surprise book of 2019. It looked intriguing but I wasn’t certain I would like it. The whole Cuban connection gave me pause. But the more I read the more interesting and intriguing it was.  Charlene and her dad Peter were about as off grid as you could get and still get around in the United States. They moved every six months. Lived hand to mouth. Only took paychecks in cash. Didn’t use a bank or have a social security card or identification of any kind. Not sure that is realistic these days but I can over look it for a book plotline.

Marshall comes to Charlene’s aid in order to get to Cuba. Her father had been murdered and the police informed her that according to her DNA he wasn’t her father biologically. This set her out to find the truth. She sort of ran into Cuba just thinking she was going to get information and get out. But we know how these things go and things are just so much more complicated than we realize.

I don’t want to spoil too much but this book was good, Exciting and thrilling. There is a bit of what appears to be insta-love in this book as well. I don’t thinking Marshall and Charlene getting together romantically would have happened so fast.

It is one enjoyable read. Definitely check this one out.
Posted by Toni at 9:13 AM