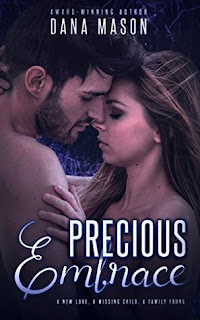 Goodreads synopsis:
A second divorce and a new baby wasn't the vision Alison Hayes had for her future. Now a single mother with two young boys, she wants to focus on her kids and what's left of her stagnant career. When Detective Johnny Rhay Bennett breezes into her life with his charming smile and country-boy accent, she's not interested. She doesn't need another man in her life, or another reason to make people talk.

Johnny Rhay doesn't believe in love at first sight, but after a one-night stand in paradise with Ali, he can't get her out of his head. With Nashville in his rear-view mirror, he's determined to make Ali his, even if it means moving to California. Ali's not easy, and she's living on just this side of bitter after her divorce, but Johnny doesn't care. He's up for the challenge. At least, he believes he's up for it until baby Micah is stolen right out from under his nose.

When Ali's faced with her worst nightmare, Johnny is the only person who can pull her out of her despair, forcing her to stay strong and not give up hope of finding her missing child.

Johnny has to keep it together and get that sweet little boy home safe before his dreams of having a family vanish too.

This is book is the second book in the Embrace series by Dana Mason.

Ali is the jerk ex-wife of Mark Summors from book one in the Embrace series. She doesn’t seem like the type of character who deserves a novel but I think Mason wanted to redeem her a bit. She is an attorney on maternity leave after the birth of her son, Micah. Her second husband, Carl, lost interest in her when she had Micah.

When book two begins, the two are divorced except for all the paperwork and he wants nothing to do with his son. He abandoned Ali during her pregnancy and then for the four months leading up to the beginning of this story. When Johnny Rhay enters the picture, suddenly Carl wants Ali back in his life, of course, sans the kid.

Johnny Rhay, grade school sweetheart of Sarah from book one appears near the end of that book tying up the strings on the murder of Sarah’s grandfather, Charlie. This is where he meets Ali and is immediately attracted to her. His attraction is so intense that he knows it’s love from nearly the first instant he laid eyes on her.

My heart went out to Johnny Rhay. His life up to this point wasn’t the greatest. But he did appreciate family and had a good work ethic. Plus he was super nice which contrasted with Ali’s abrupt nature. I wasn’t sure if I could come away liking Ali but knowing her backstory really gave me new insight into why she acted the way she did.  Her twin sister, Melissa and best friend Det. Brian were about as abrupt as she was but with her over-the-top-ness, she seemed worse than they were.

This book was a bit different than the rest since the kid, Micah, was in danger during much of the story and it really intensified the dynamic between all the characters. You realize just how much support Ali has even when she thinks they all see her as the slut of the town.

This series just gets better and better. The next book in the series, BROKEN EMBRACE features Brian and Melissa. Get ready for some fallout when you dive into that one. I am just in awe of how good the author is at creating such a compelling universe and tackles not one set of characters but a whole community of people.

Highly recommended.
Posted by Toni at 10:08 AM