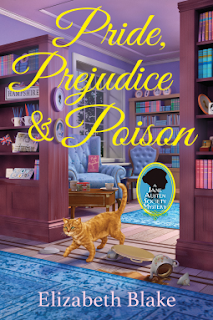 In this Austen-tatious debut, antiquarian bookstore proprietor Erin Coleridge uses her sense and sensibility to deduce who killed the president of the local Jane Austen Society.

Erin Coleridge’s used bookstore in Kirkbymoorside, North Yorkshire, England is a meeting place for the villagers and, in particular, for the local Jane Austen Society. At the Society’s monthly meeting, matters come to a head between the old guard and its young turks. After the meeting breaks for tea, persuasion gives way to murder—with extreme prejudice—when president Sylvia Pemberthy falls dead to the floor. Poisoned? Presumably…but by whom? And was Sylvia the only target?

Handsome—but shy—Detective Inspector Peter Hemming and charismatic Sergeant Rashid Jarral arrive at the scene. The long suspect list includes Sylvia’s lover Kurt Becker and his tightly wound wife Suzanne. Or, perhaps, the killer was Sylvia’s own cuckolded husband, Jerome. Among the many Society members who may have had her in their sights is dashing Jonathan Alder, who was heard having a royal battle of words with the late president the night before.

Then, when Jonathan Alder narrowly avoids becoming the next victim, Farnsworth (the town’s “cat lady”) persuades a seriously time-crunched Erin to help DI Hadley. But the killer is more devious than anyone imagines.

This is the first book in the A Jane Austen Society Mystery by Elizabeth Blake.

I have to admit first off that I am not a Jane Austen fan. But I fell in love with this book anyway. Practically every character quotes some person from a Jane Austen novel throughout the course of this book. It was pretty fun listening to the quips. Some of the comparisons between Austen character and people were lost on me since I didn’t know the backstory well enough but I managed to muddle through despite that fact.

This book is centered around the Jane Austen Society of which Erin Coleridge is a member. She is the owner of the local bookstore and closet sleuth on the side. Okay, maybe not closet sleuth. Everyone knows how Erin wants to get to the bottom of a mystery. So when the president of the Society winds up dead, Erin is on the case! So are two detectives from York: DI Peter Hemming and DS Rashid Jarral. This is their first case together and methinks this won’t be their last.

There are quite as gaggle of suspects but no one really believes any of them would stoop to such an act. When Erin’s snooping is recognized by the bad guy, she becomes a target as well. During the course of the investigation DI Hemming and Erin find a growing attachment to each other that neither of them move forward with much to my dismay. When Erin kisses Jonathan Adler early in the book I wonder what I may be missing because it is obvious she and DI Hemming are meant for each other.

The farther I read the more I fell in love with this little hamlet and its residents. And I look forward to more books in this series because seriously there needs to be more than a mere goodbye between Erin and DI Hemming!

I received this as an ARC (Advanced Reader Copy) in return for an honest review. I thank NetGalley, the publisher and the author for allowing me to read this title.
Posted by Toni at 8:27 AM