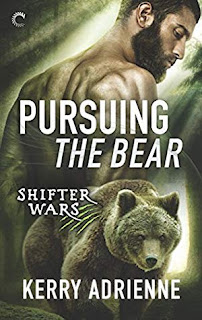 Goodreads synopsis:
The Shifter Wars heat up when a woman investigates the mysteries surrounding a fierce breed of man and exposes more than just secrets

Bear shifters exist. Professor Bria Lane has known this since she was a child. Now she's returned to the forests of Deep Creek to prove it to the world. She has no idea how close she is to that proof in ruggedly sexy park ranger Derek Poole. Intimately close.But uncovering Derek's wild side comes with a shattering price.

Like a magnet meeting metal, Derek is drawn to Bria. His destiny. His mate. So beautiful and so vulnerable. So dangerous, too: an encroachment of lions, vengeful and vicious, is closing in and they're ready for war. Now is not the time to be distracted like a lovesick cub.

If Bria reveals the truth of the Deep Creek shifters to the world, she'll bring out the worst of both sides. But Derek can't hide his secrets from the love of his life forever. He knows they're playing with fire--and that when passion runs this hot, this reckless, someone's bound to get burned.

This is the second book in the Shifter Wars series by Kerry Adrienne.

I picked this up because a bear shifter just seemed so interesting. Of course, I am reading this series out of order. Per usual for me.

This book was like watching a train wreck waiting to happen. Bria wanted so much to see a shifter bear in Deep Creek that she lied on her grant application to get the funding to do it. Under the guise of watching the bears and their watering rituals, she went on the search for these elusive bear shifters. She had seen the shifter bears when she was ten years old and the magic of their transformations fascinated her. She wanted to meet these shifter bears but I don’t think she realized what she was asking. The reality could be much worse than the fantasy.

Derek is a shifter bear. He works as a Park Ranger in Deep Creek and runs across Bria. Almost immediately he learns two things. Bria wants to out all the bear shifters to the world and she is his forever mate!

I thought this book was really interesting. I liked how unsure Derek was dealing with Bria and how Bria was not really thinking properly about the entire situation. Then add in the bear part of Derek’s personality and it made for a great read.

Definitely pick this up if  you like a good paranormal romantic thriller.