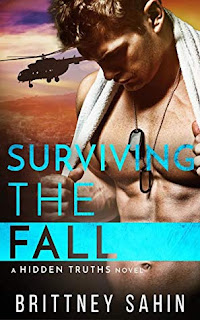 Goodreads synopsis:
Gone was the man Jake Summers had become; in his place, there were only questions . . .

After having been abducted from an FBI operation, Jake Summers wakes up the victim of an explosion in London a week later. He is perhaps the sole witness to the start of a massive terrorist plot, but his memory of the event--and of the last twelve years of his life--have been erased.

Jake's not sure if he can be the man he once was to help the government stop another attack. But when MI6 agent Alexa Ryan shows up needing his help, Jake begins to recall some of his past. And some of those memories include her.

Alexa Ryan has been keeping secrets since the day she became an MI6 agent, and the life of a spy--no social life, no love life--is beginning to wear. When she's ordered to share her true identity with the one man she didn't think she'd ever see again--a man who doesn't even remember her--she's conflicted about how much to reveal about their past. For more than a year she has been struggling to take down a notorious cyber-terrorist group, whose leader seeks retribution against America and Britain. Alexa doesn't have time to work a new operation involving Jake . . . even though everything inside of her begs to be near him.

When Alexa discovers a link between her cyber case and Jake's disappearance, the two agents are drawn together to fight a common enemy. But will Jake reclaim his memories in time to stop the attack? And will Alexa be able to open her heart once more to the man she had thought was lost?

This is the fourth book in the Hidden Truths series by Brittney Sahin.

I had previously read a book featuring Jake’s sister, Emily in the Stealth Ops series and I wanted to check out Jake’s story. I wasn’t disappointed by this title. It lived up to my expectations.

Jake Summers is an FBI agent who has a suicide vest on and the countdown has about come to an end. He barely gets away when his world explodes. When he wakes the earliest memory is when he was in high school and playing football. He is in the custody of MI6 where one of the agents, Alexa Ryan sees him. They had one week of bliss a year ago but they only knew each other’s first names. She becomes key in helping Jake recover the memories that well help them defeat a terrorist.

I thought this book was excellent. The lack of memory scenes felt like they went on forever. And it took awhile for the two of them to warm up to each other. But the mystery and suspense was spot on.

I was surprised by the scenes involving Jake’s family. I thought that to be a bit unrealistic to put so many people in danger. But it did give his father the opportunity to show him the laptop with all the emails he had saved when he had been deployed in the Marines.

I spent the entire book trying to figure out what the catalyst would be that would bring back his memories. Plus, I started to speculate that one of their own was dirty. This book definitely keeps you guessing right until the end.