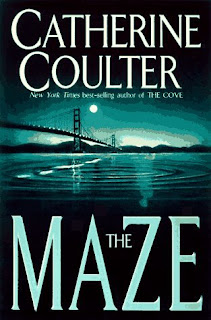 Goodreads synopsis:
Lacey Sherlock's life is forever changed when her beloved older sister's body is discovered in an abandoned warehouse with multiple stab wounds. Belinda is the fourth victim of the String Killer, the handle the media has given to the serial killer who leads his victims into a maze with a ball of twine. Seven years after Belinda's death, Lacey, now an FBI special agent becomes a member of Dillon Savich's new Criminal Apprehension Unit (CAU), where he has programs to aid in the apprehension of serial killers. When the String Killer strikes again in Boston, Lacey immediately spots his handiwork, resulting in his capture. But did he really kill Belinda? Or was it someone closer to home? Together, Lacey and Dillon must discover the killer's true identity - before they both become the next victims.

This is the second book in the FBI Thriller series by Catherine Coulter. But it is also the first book in the Agents Sherlock and Savich series. From here forward the series now focuses on these two characters as leads.

Basic premise: Lacey Sherlock has been tormented for seven years about the death of her half-sister Belinda. She had been killed by a serial killer named the String Killer who put his victims in a maze with a string leading them to the center and then killed them mimicking the myth of the minotaur. After her sister’s death, Sherlock becomes obsessed with finding the killer. So obsessed she joined the FBI sand then when she became an agent began a more in-depth search using the FBI’s resources.

Here is where she meets Dillon Savich who becomes her boss after she bested him in a training exercise before she was awarded the coveted FBI badge. Savich then makes sure she is assigned to his team because he wants the best agents. Her original intent was to become a profiler but she realized almost too late that a job such as that might break her mentally. Her mother and sister were not the most mentally stable people. She figured it ran in the family.

There are a lot of twists and turns in this story and I did find some of the dialogue during the more sexy moments a little old fashioned but this book had been written in 1997. It might need a bit of an update where that is concerned but this book still stands the test of time. This is where the phenom was created. The first book in a blockbuster series that is still going today as I write this in 2019.

I did feel like the relationship between Savich and Sherlock was a bit premature but this has books and books ahead where we can explore the complexities of them as a couple and as agents working together. I like this dynamic between the two leads but I wonder when the whole “psychic sense” comes in for Dillon that he has in current books. He sure doesn’t use this sense here in book one.

I loved this book and look forward to reading every single book in this series. It is a mission of mine now. MISSION SHERLOCK/SAVICH. How many can I read by the end of the year, I wonder. I am excited to find out.

The Maze is A-MAZE-ING!