The Pawful Truth (Cat in the Stacks #11) by Miranda James 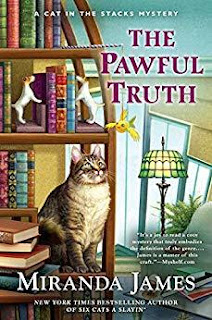 The Pawful Truth
(Cat in the Stacks #11)
by Miranda James

Goodreads synopsis:
When Charlie Harris decides to go back to school, he and his Maine Coon cat, Diesel, find themselves entangled in a deadly lovers quarrel on campus in the latest installment of the New York Times bestselling series.

In addition to his library duties and his role as doting grandad, Charlie has enrolled in  an early medieval history course offered by young, charismatic professor Carey Warriner. Charlie feels a bit out of place- his fellow classmates are half his age- except for Dixie Bell Compton, another ‘mature’ student. When Charlie hears an angry exchange between her and their professor, his interest in piqued. He’s even more intrigued when she shows up at his office asking for a study partner. Charlie turns her down and is saddened to learn just a few days later that Dixie has been killed.

Charlie wonders if Professor Warriner had anything to do with Dixie’s death. Warriner is married to a fellow professor who happens to be a successful author. There are rumors on campus that their marriage was on the rocks. Was Dixie's death the result of a lovers’ triangle gone bad? Charlie soon discovers that the professor’s wife may have some secrets of her own and his suspect list is only getting longer.
As he and Diesel step further into the tangled web of relationships, someone else is viciously killed. Whose jealousy finally erupted into murderous rage? Was it a crime of passion or is there another  more sinister motive? Charlie  races to unravel this mystery: and to draw out the culprit, he may just have to put his own life on the line…

This is the eleventh book in the Cat in the Stacks series. This is the first time reading this series and author.

I had nearly made it twenty percent into the book before I realized that the main character Charlie was indeed a male and not a woman like I assumed. Many cozy mysteries have main characters with names that could pass for either gender. This is one of those.

There was quite a bit of what I would call filler story in the beginning half of the book. Not too much seemed particularly relevant to the main thrust of the storyline. Because of this I began skimming in order to find the real meat of the story. The murder finally happened between forty and fifty percent through. And after that, the book flew. The read was effortless.

The story starts with Charlie taking a medieval history course. There he meets the instructor Carey Warriner and a student named Dixie Bell Compton. It is obvious the two know each other and Warriner is upset Compton is taking his class. Charlie tries to stay out of the stress he feels coming off of them both. Then he is introduced to Carey’s wife who is also a teacher and a third teacher, Dan, who is helping the wife with research for her Regency area book of which he is an expert. There is a lot of conflict between these people and the local police detective asks Charlie to keep his ear to the ground concerning them. This brings him and his trusty Maine coon cat, Diesel right in the middle of the action when the body of Dixie Bell Compton is found dead.

The mystery really kept you guessing and I had an idea whodunit thanks to the cat who didn’t seem to like that particular person. But I wasn’t for sure of the culprit till the end since there were so many threads to the mystery that had to connect perfectly.

Good book once the murder happened. But a little too much filler story in the beginning for me.

I received this as an ARC (Advanced Reader Copy) in return for an honest review. I thank NetGalley, the publisher and the author for allowing me to read this title.
Posted by Toni at 9:30 AM