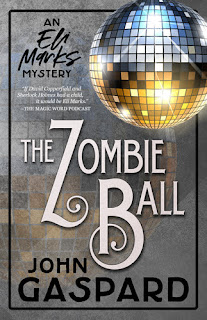 
A Blast From the Past
Eli’s asked to perform his magic act at a swanky charity gala, The Zombie Ball– a former zombie pub crawl which has grown into an annual high-class social event. What begins as a typical stage show for Eli turns deadly when two of the evening’s sponsors are found murdered under truly unusual circumstances. Compounding this drama is the presence of Eli’s ex-wife and her new husband, Homicide Detective Fred Hutton. Under pressure to solve the crime before the 800 guests depart, Eli and his detective nemesis go head-to-head to uncover the bizarre clues that will unravel this macabre mystery.

This is the sixth book in the Eli Marks Mystery Series by John Gaspard.

Eli Marks is a magician. Not the best in the business but a decent one. He is performing at the annual Zombie Ball. It was a pub crawl that expanded to a social event. When two of the high powered sponsors of the ball are found dead, it is up to Eli to provide the clues leading the police to the killer.

Eli is familiar with the range of talent who are performing. One is a popular celebrity magician who is really too big a name for this event. There are some magician tricks that are used while pulling off the murder. And Eli recognizes some of the techniques he has used in his own acts.

I thought the mystery was good but too quickly wrapped up for how complex the timing was behind the scenes to pull off the murders. I wish there had been a bit more drama between Eli and his ex-wife's new hubby Detective Fred. I also thought the person who committed the crimes have given up too easily at the end, but that is just me. I didn't get to feel that rush when the sleuth captures his nemesis. Bummer!

Great story but I went away lacking something tangible. The lead in to the murders was pretty long and the end disappeared in a puff of smoke. I guess I should have known better. We are dealing with magicians here.

I want to thank the author John Gaspard for letting me review this ARC for an honest review. If you love this, there are five previous books in this cozy mystery series. And check out the cool new covers! They are awesome!
Posted by Toni at 4:26 PM