And Then They Were Doomed by Elizabeth Kane Buzzelli 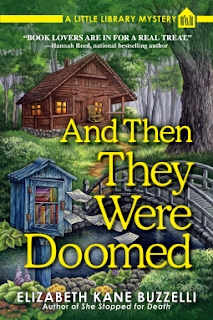 Goodreads synopsis:
Zoe Zola is one of ten invitees to an Agatha Christie symposium. Tempers flare…and then there are nine. Can Jenny Weston save Zoe from murder on the Upper Peninsula?

Little Person author Zoe Zola believes that one of the unluckiest things in life is to receive an invitation—in the form of a letter edged in black—to an Agatha Christie symposium at an old Upper Peninsula hunting lodge. Her reluctance dissipates when she learns that the organizer is named Emily Brent—the name of a character poisoned by cyanide in Christie’s And Then There Were None.

As a dreary rain soaks the U.P., Zoe and nine other Christie scholars—each of whom bears a vague resemblance to one of the classic mystery novel’s characters—arrive at the lodge. At the opening night dinner, arguments flare over the experts’ discordant theories about Christie. Next morning, the guests find one particularly odious man has gone—whereabouts and reasons unknown. Such a coincidental resemblance to a work of fiction is surely impossible; therefore, it appears to be possible.

As the guests disappear, one by one, Zoe resolves to beat a hasty retreat—but her car won't start. She calls her friend, amateur sleuth/little librarian Jenny Weston, but Jenny will have to wait out a storm off Lake Superior before she can come to the rescue. If Zoe’s to stay alive to greet Jenny when she eventually arrives, she’ll have to draw on everything she knows about Agatha Christie’s devilish plots in Elizabeth Kane Buzzelli’s fourth tantalizing Little Library mystery.

This is the fourth book in the Little Library Mystery series by Elizabeth Kane Buzzelli.

First there were ten of them all meeting in a remote location to speak about their love of Agatha Christie. Strangely, some attendees have actual Christie character names like Emily Brent from And Then There Were None and Bella Webb from A Pale Horse. Zoe Zola had received her invitation edged in black which was a sign to her and her late mother that a death was approaching. Would it be her own? She doesn’t know what to expect, but due to her past she thinks this could be one big set up to get back at her for something her mother did long ago.

I had a hard time getting into this book in the beginning. I felt like I was missing something. Then I realized it was the fourth book in a series and it suddenly made sense to me. I was missing a huge back story… three books worth.

I am finding it a little bit of a stretch to believe that so many people dislike Zoe or her mother and go to such lengths to come after her. After twenty years you’d think most people would let go of some indiscretion that happened so long ago. It is not such a big deal any more considering the culture nowadays.

Back in my days of writing fan fiction there used to be a few people who tried to emulate the works of Christie. And Then They Were None was a particularly hard one to replicate. Not many had success doing it. Even though this is a combo of that story and Murder on the Orient Express, I am not sure this is completely successful either. I  came away wondering why the ruse of it all? It didn’t really seem necessary. It felt like a whole bunch of work for little effect. The culmination could have probably happened days earlier and still been as successful as it was after five days. The ending just lost steam instead of building tension.

I realize this is part of a series of books yet the previous three seem to feature the librarian Jenny. It felt odd to change the focus. The whole thing with her and Tony probably could have been expanded in a different book. I felt that part of it was rushed and both of them seemed almost unnecessary to this plot.

I felt like the beginning was pretty confusing until I got about five chapters in. Then everything seemed to even out. There were a lot of characters to contend with and that alone was a challenge to keep up with especially when Zoe was trying to figure out why some of the names mirrored Christie characters so perfectly. The build up in the middle was good and the twist was unexpected at the end but I fear some will guess what is going on if they are a regular mystery reader.

Pretty good book. Not my favorite and its Christie leanings didn’t always work out but I found the story to satisfy even if it didn’t end with a flourish.

I received this as an ARC (Advanced Reader Copy) in return for an honest review. I thank NetGalley, the publisher and the author for allowing me to read this title.
Posted by Toni at 7:03 AM