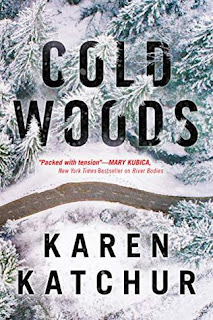 Goodreads synopsis:
Buried bones of the past rise to the surface in this chilling mystery from the bestselling author of River Bodies.

When the long-buried bones of a man turn up in the middle of December, Pennsylvania homicide detective Parker Reed knows he’s in for a cold case.

Trisha and her friends were teenagers when Trisha’s stepdad went missing. Now, thirty years later, his remains have been found in the mountains. The women have always known there was more to his disappearance than meets the eye, and they must confront their grim past. Secrets can stay secret a long time in the lonely Appalachian foothills—but not forever.

When Parker and his partner identify the remains, their investigation leads them to Trisha’s childhood home. But the deeper Parker digs into the crime, the more he realizes that the truth isn’t always simple. In fact, it’s so complicated that even Trisha and her friends don’t fully understand what really happened in those cold woods.

This is the second book in the Northhampton County series by Karen Katchur.

There is a lot going on in this book and even though the story is focused around the discovery of a dead body up in the mountains; unfortunately, the man uncovered isn’t the only truly bad guy in this book. Tricia’s step dad was not a nice guy and Lester made more than her life miserable.

Detective Parker Reed and his partner discover the body and they are immersed in the lives of Tricia and her friends, Carlyn, Scott and Dannie. Not to mention all their parents and neighbors. The death of Lester occurred in 1986, so some people’s memories of the time are rusty. I can’t imagine trying to recall a specific day back when I was a senior in high school. That would be a nightmare waiting to happen.

I would have liked to see more about Detective Reed and his relationship with Becca because that seemed to be pretty much glossed over. I didn’t quite understand the dynamic between them. I know they were both featured in book one of this series and maybe reading that book would have made it all more understandable to me.

The last third of this book was excellent. Exactly what I was looking for in a police procedural mystery. I wouldn’t have minded a few flashbacks in the first two-thirds but the backstory sort of took over the entire novel making it a struggle to get through.

All in all an above average read where I had hopes for more. But the twist at the end revealing whodunit was exactly what I was waiting for. Didn’t see that one coming. Definitely going to check out book one in the series, RIVER BODIES.

I received this as an ARC (Advanced Reader Copy) in return for an honest review. I thank NetGalley, the publisher and the author for allowing me to read this title.
Posted by Toni at 10:28 AM