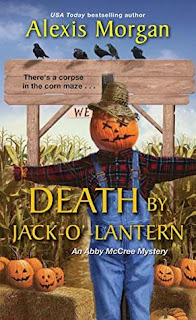 Goodreads synopsis:
Overcommitted committee member Abby McCree gets in a patch of trouble trying to solve the murder of a pumpkin farmer …

The small town of Snowberry Creek, Washington, is gearing up for the Halloween Festival, and naturally Abby is on the planning committee. As part of her duties, she's picking up a pumpkin order from ornery farmer Ronald Minter. But what she finds instead is the farmer in the middle of his corn maze with a knife in his back.

The police suspect a homeless veteran named Kevin Montgomery, who was seen arguing with Minter when the farmer accused him of trespassing and stealing pumpkins. Abby's tenant Tripp Blackston, a veteran himself who’s been helping Kevin, is sure he’s innocent. Together, Abby and Tripp follow the twists and turns of the case to corner the corn maze killer—before someone else meets a dead end …

This is the second book in the Abby McCree Mystery series by Alexis Morgan.

The book starts out with Abby’s neighbor Tripp offering her up as one of the heads of the Halloween Festival’s planning committee. She agrees only if Tripp co-chairs. She spies Tripp going out at night all dressed up in his combat fatigues and looking like he is ready to go out on patrol like he did when he was in the military. Abby follows him and gets the stuffing scared out of her when she is captured by one of his fellow Vietnam Vet guys (Kevin) who is living around a corn maze owned by curmudgeon Ron Minter. Tripp saves her from the misunderstanding. When Minter’s dead body is found at the center of his maze, they want to question Tripp’s friend Kevin. Tripp refuses to give away Kevin’s location since he has been having issues of PTSD and he didn’t want to spook the man. Tripp is put into jail. Abby makes it her job to discover the real killer before Tripp falls on his own sword and ruin’s his life.

I really enjoyed this book. The mystery was interesting. Not only the mystery of whodunit as far as the killing but who was carving all the very life-like pumpkins being left on people’s porches. The other thing I was digging was how well formed all the cast was. I could immediately tell who was who when they came onto the canvas. You don’t find that a lot with some cozy mysteries.

Abby has three possible love interests in this series and I find that fascinating: Detective Ben Earle, Police Chief Gage Logan, and of course, Tripp Blackston. She shares a kiss with Tripp at the end. And frankly, that is not enough PDA for me. I would have liked to see a tad more romance in this story, but it certainly didn’t lack in anyway without it. It is just a personal preference.

There are a couple of times in the story where you think they might have the culprit and then …. nope, it’s not them. Great red herrings. I like it when the plot surprises me. I wish there had been a bit of foreshadowing giving us that “ah ha” moment about the true killers and their motives. Maybe I just overlooked it when these people came on stage.

All in all it is a great cozy mystery that everyone should enjoy wrapping themselves up in for an afternoon. Definitely check this one out.

I received this as an ARC (Advanced Reader Copy) in return for an honest review. I thank NetGalley, the publisher and the author for allowing me to read this title.
Posted by Toni at 9:31 AM