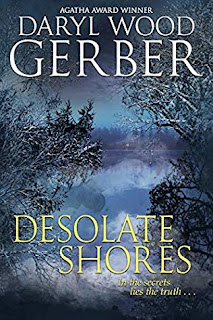 A chilling murder, an elusive killer, and a family mystery that hits too close to home . . .

After finding the body of her best friend on the icy shores of Lake Tahoe, Aspen Adams refuses to stand by and watch as the local sheriff’s department begins their search for the killer. Launching her own investigation, she’s soon confronted with a growing array of secrets—both about the friend she thought she knew and about many of the people in her own life. As fragmentary clues and escalating dangers threaten to derail her, she must also cope with the disturbing behavior of her deadbeat sister and troubled teenage niece.

Determined to overcome her personal demons over past failures, Aspen is driven to unravel the conflicting evidence and a shifting range of suspects to bring the killer to justice, even as a family trauma unfolds that threatens to upend her life. And as her investigation inexorably leads her to a shocking discovery and taunts her with a solution that is just out of reach, Aspen realizes that the killer wants nothing more than to see her and her niece dead . . .

This is the first book in a new suspense series by Daryl Wood Gerber featuring Aspen Adams.

Aspen Adams finds the dead body of her good friend, Vickie and spies a design the deceased has written in the snow. Unfortunately, she only gets a glimpse of the design before she loses her balance and destroys the delicate impression. She begins her own search for the killer since her own parent’s deaths weren’t investigated to her own satisfaction. Aspen doesn’t trust the police to do a good enough job to satisfy her.

Her niece Candace is staying with her which makes things more complex as the killer is revealed at the end and brings the niece into the equation to lure Aspen in a trap. The story thread about Aspen wanting to gain custody of Candice from her druggie sister was quite compelling.

Detective Nick Shaper seemed to like Aspen from the minute he met her but knew that he couldn’t get involved with a suspect until after the case had concluded. This left us the readers wanting more and the characters conflicted about a possible romance. I think the author liked teasing me with a possible relationship here.

Aspen latched onto Karen, one of Nick Shaper’s colleagues, from the get go. She was a possible friend but her continual drinking left her unavailable much of the time and not as trustworthy when push came to shove.

I thought all the characters were well crafted and really peaked my interest.This is a new series in a totally different genre for Gerber and I think she hit it out of the park with this one.  I look forward to more books in this series.

I received this as an ARC (Advanced Reader Copy) in return for an honest review. I thank NetGalley, the publisher and the author for allowing me to read this title.
Posted by Toni at 9:34 AM