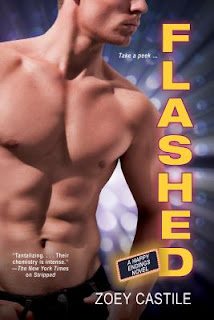 Goodreads synopsis:
When a man makes his living by his looks, he can forget that love--and lust--are more than skin deep. But the right woman can remind him . . .

A former soccer player, stripper, and model, legendary party boy Patrick Halloran finally gets his big break starring in thesummer blockbuster. But when an accident leaves him changed forever, he hides away in his secluded Montana ranch. Only his new housekeeper is allowed inside--with one rule: she's not allowed to see him. But Pat sees her, and she's the most stunning woman he's ever laid eyes on. Even her voice is beautiful. Still, Pat can't allow himself to get close to anyone. Not without a fight at least . . .

Magdalena "Lena" Martel is a long way from Queens, New York. After a rough patch, the aspiring artist is working her way through college--even if it means keeping house for a man whose gruff voice she can only hear through a closed door. Still, Lena senses Pat's got a good heart, maybe even a lovable one. She's intrigued--until his anger sends her running into the freezing woods. Now Pat will have to find her--and when he does he may have found the one woman who can thaw his heart--not to mention the rest of him. But can their new bond survive the paparazzi--and their personal
demons? . . .

This is the fourth book in the Happy Endings series by Zoey Castile.

This book made me aggravated, but not in a bad way. Maybe frustrated is a better word for it. The tension between Patrick and Lena went on and on and on. Granted, the guy has a problem. He had it all. Didn’t appreciate any of it. Then when an accident nearly takes his life and the life of his brother, Jack he loses it. He can no longer venture outside. Panic sets in and he feels trapped in his Montana house. His best friend, Scarlett West, a popular romance author, hires a housekeeper for him. But Lena isn’t allowed to see Patrick. She cleans, makes food and such but isn’t allowed in certain parts of the house. The two speak a lot through shouting from room to room or text messages.

It is probably the anguish of these two never meeting that is what makes this book so good. I am sure it is what made them want each other more over time. They wanted each other but couldn’t have each other. That made me want a happy ending for them. I knew I was going to get one because the series is called Happy Endings. Duh! But author sure made me question whether it would happen or not.

Lena was the giver. Always doing for others. I liked the reverse dynamic at the end where all her friends turned the emotional tables on her and she ended up being the one who was put up on a pedestal for a change.

This book was both wonderful and heartbreaking. Plus it had some of the most memorable secondary characters I’ve seen/read in a long time. Speaking of that… I really want to see a book featuring the story of Hutch and River and Scarlett and Ricky Rocket. That would be awesome. I checked the main characters of the previous books in this series and neither couple was the main feature of those books. I may not get what I want, but it is good to dream sometimes. Hint. Hint. Wink. Wink.

If you love a good romance, definitely check this one out. I guess you could put this into the hate to love category. That seems to be a popular theme these days in contemporary romance. Whatever you call it, I call it good stuff. Definitely an author to watch and put on your must read list.

I received this as an ARC (Advanced Reader Copy) in return for an honest review. I thank NetGalley, the publisher and the author for allowing me to read this title.
Posted by Toni at 8:02 AM