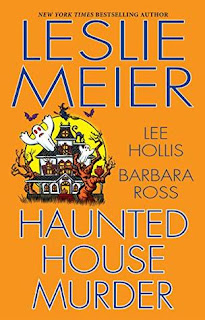 Goodreads synopsis:
Tricks and treats keep the Halloween spirit alive in coastal Maine. But this year the haunted house theme is getting carried a little too far . . .

HAUNTED HOUSE MURDER by LESLIE MEIER
Newcomers to Tinker’s Cove, Ty and Heather Moon have moved into a dilapidated house reputed to be a haven for ghosts. Now strange noises and flickering lights erupt from the house at all hours and neighborly relations are on edge. And when a local boy goes missing near the house, it’s up to Lucy Stone to unravel the mystery of the eccentric couple and their increasingly frightful behavior.

DEATH BY HAUNTED HOUSE by LEE HOLLIS
For the past two years, the house next door to Hayley Powell has sat abandoned after the owner died under mysterious circumstances. The Salinger family has recently taken possession of the property, but the realtor behind the deal has vanished—after a very public and angry argument with Damien Salinger. If Bar Harbor’s newest neighbors are murderers, Hayley will haunt them until they confess.

HALLOWED OUT by BARBARA ROSS
With its history of hauntings and ghost sightings, Busman’s Harbor is the perfect setting for Halloween festivities. But when a reenactment of a Prohibition-era gangster’s murder ends with a literal bang and a dead actor from New Jersey, Julia Snowden must identify a killer before she ends up sleeping with the fishes.

There’s nothing like home sweet home in this trio of Halloween tales . . .

I have to admit, this book kind of threw me in the beginning. When I got to the end of story number one and no murder had actually happened, I felt like I stepped to the edge of a cliff and fell off before the end of the book. I originally thought this was a story only by Leslie Meier. On the book cover her name is so huge, I overlooked the other two author’s names. I was three chapters into the next story before I realized this was three short stories and not one big story.

I was disappointed there wasn’t a death in story one. I figured it was a given considering the title of the book was “Haunted House MURDER.” I was ready to go in for the long haul when the story seemed to abruptly end. That may have been the natural ending but I was left wanting more to this tidbit of Meiers work. I felt for Lucy as she tried to take care of her grandson pretty much on her own. No one else even seemed to have her back,. Not her daughter or her hubby. I wanted more of this part of the story. It wasn’t really resolved. Now I am wondering if this will be brought up in the next book. I need more, dang it!

Short story number two DEATH BY HAUNTER HOUSE was pretty good after I realized it was indeed its own separate story. I had never read a Lee Hollis story and so I was intrigued by the characters. I did have a bit of trouble in the beginning distinguishing children from adults. But once I did, I thought it was a hoot. Hayley’s hubby was almost as bad as the kids sometimes. I will definitely have to check out more of this author’s work. I think I have a few books already in my vast Kindle Library.

Short story number three HALLOWED OUT was the best of the bunch, in my opinion. This story alone is worth the purchase of the book. I am totally going to dive into Barbara Ross’s books with gusto now. I have five or six, I think, in my collection, both digital and proper paperback versions. I felt the story was completely fleshed out with all the motivations and structure of a larger book. To say I was impressed was an understatement.

If you are keeping count, there are murders in story two and three but not in story one.

There was also a bit a weirdness around the placement of the recipes. I felt like they restricted the flow of the story. I would have liked them to be at the end instead of between stories. But that is just me. I don’t read books like this for the recipes. But for the people who like them, I am sure they are appreciated wherever they find them.

Overall, it was a nice and enjoyable read. I just wish the stories could have been a bit longer. Sometimes when you are invested in a world, it is hard to say goodbye. Definitely check this out if you are into cozy mysteries and want to check out new authors. You won’t come away disasppointed.