Jade in the Snow (Mobile Intelligence Team #4) by Louise Dawn 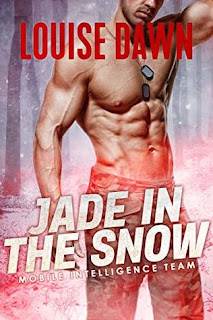 Jade in the Snow
(Mobile Intelligence Team #4)
by Louise Dawn

Goodreads synopsis:
A fractured couple, and a twisted killer.

Derek "Slater" Banez was a military lifer, until PTSD got the better of him. After quitting his black ops career with MIT, the bureau offers Slater a position in Utah as an FBI training instructor. When he runs into Kathleen Quinn—the love of his life—Slater will be placing everything he holds dear on the line. Except she's no longer the woman he used to know.

Kat fell hard for the deadly sniper but when he betrayed her trust, she walked away. Now Kat holds dangerous secrets, and keeping the man who destroyed her heart on the periphery is the least of her problems.

When a ruthless serial killer sets his sight on Kat, Slater will put his own life and career on the line. Can Slater keep Kat alive, or will he place her and his former MIT team in the crosshairs of a determined killer?

This is the fourth book in the Mobile Intelligence Team series by Louise Dawn.

This is unlike other romantic suspense books. The couple started out together and circumstances and mental illness forced them apart. Derek “Slater” Banez had PTSD that crushed his world making him act out in ways that hurt his girlfriend Kat Quinn. Both were in intense life-threatening situations not long after their breakup and each saw the other in their time of dire need. When Derek finally learns of the attack on Kat, he nearly loses his mind and goes into research mode to bring the man down.

This book was sweet and heart-breaking at the same time. You feel for both characters in their specific situations and wonder if you would have acted any differently in their places. This book is unputdownable in that way. You need to know what the outcome will be and thus you read, read, read until the conclusion.

Great romantic suspense. I will definitely be checking out the other three books in this series since this book was so stellar.


I received this as an ARC (Advanced Reader Copy) in return for an honest review. I thank NetGalley, the publisher and the author for allowing me to read this title.
Posted by Toni at 8:00 AM