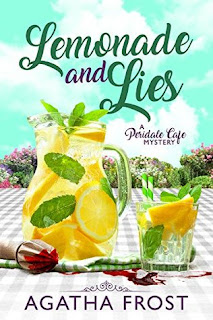 When the entire village is invited to a garden party for a mysterious ‘special announcement’, nobody expected that party to end with a man being thrown to his death from a window. The murder is committed at Julia South’s estranged father’s manor, so all eyes in Peridale turn to her to solve the case. In a race against the clock, Julia must juggle her blossoming romance with Detective Inspector Brown, and her young lodger, Jessie’s, sudden strange behaviour, to uncover the truth behind the man’s untimely death. With members of her own family in the frame, will Julia like what she discovers?

This is the second book in the Peridale Cafe mysteries by Agatha Frost.

Now that we have one book behind us and the setting and characters are in our mind, this story lets us focus more on the mystery and the history behind who Julia really is and where she comes from.

Julia’s father is married to Katie, a much, much younger woman who wants to turn the family’s Victorian home into a day spa. Katie’s brother is not in line with the plans. He thought the house would go to him once the old man bought the farm but he knows that their father would give bubbly and beautiful Katie anything she wanted even his inheritance! Not long after Charles makes this realization, he is thrown from a high window in the old Victorian to meet his death on the ground amongst the shards of broken window glass.

The gauntlet has already been thrown by DI Barker Brown for Julia to stay out of his investigation so she doesn’t mention to him the footprints she finds leading to the bathroom or the inclinations she has deduced. She has a greater grasp of intentions merely because this is her town and she knows many of the people so well. Many people would have been slapped with a charge of impeding an investigation and slammed in the poky but not Julia since the Detective Inspector is sweet on her.

There wasn’t as many leaps in logic in this story but there were still enough to make it frustrating to read. I am hoping that the farther Agatha Frost gets into this world the more comfortable we all get with these characters and with the flow of how it all will transpire from book to book.

Good mystery and I was hopeful at the end that something was developing between Julia and the good Detective Inspector Brown.