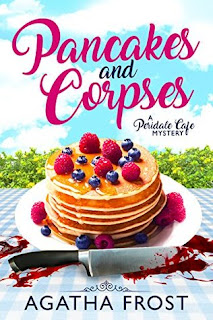 Goodreads synopsis:
Soon to be divorced Julia South never expected to be caught up in solving a murder, until she discovered the body of her cafe's most awkward customer. With a new smug Detective Inspector in town who underestimates her every move, Julia makes it her mission to discover the real murderer, before her village friends are dragged into the frame, and more bodies are discovered.

This is the first book in the Peridale Cafe mysteries by Agatha Frost.

The book opens with Julia South contemplating her upcoming divorce and staring at the divorce papers and then the first encounter with the new detective inspector in town. This was the first inkling that this was a British detective cozy mystery. The dialogue and narrative didn’t really clue me into that fact. The title of Barker Brown Detective Inspector is what made me realize it was indeed a British story.

Someone at the local paper hinted to Julia that she was about to receive a nasty review about her restaurant. So, she went to confront the lady in question. Through a grand leap of logic, she ascertained the name of the writer almost immediately. These leaps in logic did happen quite often throughout the story. We didn’t get to figure out the clues along with Julia. It seemed Julia was always ten steps ahead of us. No wonder she couldn’t get the romantic attention of the good detective inspector. She seemed to be almost competing against the poor chap. Whomever finds the killer first wins!

The mystery was indeed complex and involved quite a few of the town’s residents which was great. Since this was the first book in a long series it was nice to see so many of the townsfolk. I felt like the good detective inspector really needed to grow a bit of a backbone and take the lead. He almost let Julia walk all over him and this was his investigation not hers. I would have liked to see him take charge more and be strong and more manly. I think she could take a clue from Julie Mulhern’s Detective Anarchy Jones and Helen Cox’s Detective Inspector Malcolm Halloran.

Not long after the critic is found dead her son is also found murdered and Julia’s friend Roxy is no where to be found. The mystery itself was solid but the leaps in logic made it frustrating to follow.

Pretty good mystery but I wanted more Detective Inspector Brown and more hints of a possible love waiting in the wings for the two of them.
Posted by Toni at 10:23 AM