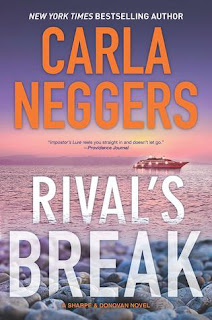 Goodreads synopsis:
A deadly poisoning, a stolen painting and a criminal mastermind challenge the skills of FBI agents Emma Sharpe and Colin Donovan as never before in their latest high-stakes case. New York Times bestselling author Carla Neggers has crafted a gripping novel of international intrigue and suspense not to be missed.

Emma Sharpe is recovering from a shattering loss while her husband, Colin Donovan, is deep into his latest undercover mission. So they’re grateful to enjoy a peaceful autumn weekend together on the southern Maine coast to celebrate Colin’s brother Andy’s wedding.

But the peace is short-lived when Kevin Donovan, a marine patrol officer, receives a call to check on suspected food poisoning at a party aboard a yacht. Colin decides to tag along. He is surprised to recognize one of the victims as an undercover British intelligence officer, and it quickly becomes evident they’re dealing with something very sinister. At the same time a valuable painting by Irish artist Aoife O’Byrne—a friend of Emma and Colin’s—is missing from the yacht, and the connections make the investigation international and extremely personal.

Emma and Colin discover they are up against a deadly foe who plans to strike again. With the help of HIT, their small, elite Boston-based FBI team, they must foil an attack that will have devastating effects. It’s a case that will alter their lives beyond anything they’ve ever imagined…

This is the ninth book in the Sharpe & Donovan series by Carla Neggers. Carla is a must buy for me but I have to say this wasn’t my favorite of the series. Above average, of course because it is Neggers, but not what I was expecting.

I really felt like there was almost too much backstory in the beginning. I felt lost amidst that and the actual poisoning/missing painting storyline. I didn’t know where to really focus at the start. I don’t think I caught my reading groove in this until I was over halfway though. Then it flew and the real point of the story started coming more to the surface. I was relieved.

Basic premise: A bunch of  people get poisoned on a yacht owned by a rich dude. Donovan spies a known British intelligence agent and suspects that this poisoning is much more than it seems. To top it off, there is the theft of a painting to uncover as well. Then you add in all the espionage stuff and things get heated pretty quickly.

I think part of my problem with this is that I haven’t read a book in this series in a long time and my Sharpe and Donovan radar is a bit clouded and rusty. I should have read a book or two back and then picked this one up afterward. I think I needed more lead in instead of just being deluged with the backstory at the start which was more telling me stuff than showing me stuff. I get more invested when I can connect with the characters and that didn’t happen until later in the book.

Above average suspense, espionage thriller but I felt like it lacked something I can’t really put my finger on. But don’t take my word for it. Pick it up and judge for yourself.