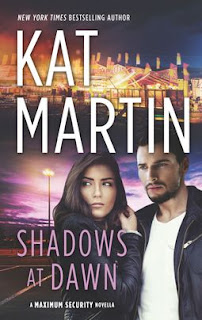 Private detective Jaxon Ryker swore to himself he would keep his hands off Mindy Stewart. No matter how much Jax might secretly wish otherwise, his colleague at The Max is strictly off-limits. But when Mindy is the victim of an attempted kidnapping, everything changes. With both of them thrust into danger, Jax swears to protect her. As they work together in search of answers, it becomes clear Mindy’s life is on the line, so a trap is set—with Mindy as bait. Jax and Mindy have to put aside their overwhelming attraction, but if they live through this, all bets are off

This book follows Kat Martin’s popular novel, THE CONSPIRACY. It is a short novella but totally worth the read. I only took off .75 stars merely because I wanted more of this book and its characters. I felt like this could have been a full length novel if it wanted to be.

Basic premise: Mindy Stewart is working as what I assume is a temp accounting/receptionist job at Maximum Security. She feels like she fits well with the team but doesn’t seem to be an actual part of the team yet. She has a crush on Jaxon Ryker, one of the investigators on the team. He likes her too but she doesn’t know that when the book starts. As she leaves for the day, later than usual, she is the victim of an attempted kidnapping. Jax saves her from her attacker and is immediately invested to find out who is targeting Mindy.

I thought this book was great. I was invested from the minute Mindy was attacked. She felt like the “every woman” who wanted a man who seemed out of her reach. I liked that aspect. It gives women an idea that maybe they are more than they think they are.

I thought the funniest part was that Jax was trying to make it all business but the second he discovered that Mindy wanted him too, he was lost. A switch was flipped and he dove in head first to a relationship he didn’t know he might crave more of. This was not the same as his old hookups that he could walk away from and that sort of had him distracted sometimes making Mindy more open to attack.

Awesome read. Great story and suspense. I just wished there was more of it. Kat Martin is a must read for me now. Check it out for yourself.

I received this as an ARC (Advanced Reader Copy) in return for an honest review. I thank NetGalley, the publisher and the author for allowing me to read this title.
Posted by Toni at 7:21 AM