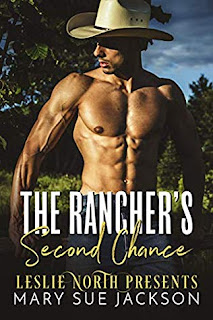 Goodreads synopsis:
Samantha Jenson likes things ordered. She’s managed to carefully plot out her life, creating lists along the way to keep her on track: Leave small town. No more cowboys—especially him. Get educated. Don’t even think about him. Become a professor. So far, she’s put a check in every box but the last.

When her family ranch in Texas goes to her after the death of her father and brother, she’s forced to return home to put things in order and to make sure the property doesn’t get into the hands of her shady cousin. Enter Cole Baker. Tough, hard, distant. Sexy. The kind of guy you’d want standing between you and an attacking bear. Or in your bed. He’s definitely not on Sammie’s to-do list. But when the two of them are thrown together to save the ranch, her list begins to look not quite so important.

No one had ever mistaken Cole for one of the good guys. In and out of trouble his whole life, his one brush with respectability came during the brief time he and Sammie dated in high school. Now, fresh out of the army, he finds himself suddenly navigating the world of single parenthood and is desperate to give his son stability. He needs a job and a place to stay, so when Sammie offers him the role of running the ranch, he swallows his pride and agrees.

All his life he’s let down everyone he loved, so he’ll try to focus on the job, and definitely not think about how beautiful Sammie is, how goddamn cute all her lists are or how good she is with his son. It’ll only end in heartbreak, just like before… right?

Sometimes I request books simply because I know I will need a break from the suspense, action and mystery of other titles on my TBR. This was one of those selections. I knew it would be a guilty pleasure read. I knew I would like it. And I was right.

There was a lot of tension in this book even knowing it would be a guilty pleasure read. Tension is sometimes hard to capture in a romance but this book does it honestly. They were both so hard-headed it was a wonder either of them bent in order to make the quick step into the relationship that we all knew was inevitable.

I thought all three leads, Sammie, Cole and Devon were full blown characters. No cardboard people, at least in the main characters. I loved the section with Richard and Cole. It didn’t seem possible in the beginning that Cole and his brother-in-law would ever see eye to eye considering his bad boy past and Richard’s job as a cop. That was so sweet when Richard opened his eyes to how much Cole had changed upon becoming a father.

Sammie’s cousin, Peter did seem to be a bit stereotypical. Big guy. The man. Putting one over on the little guy even though that little guy was his cousin. What a schmuck! I would have liked to see a few more scenes with him.

I enjoyed watching the characters grow and how relating to Devon made them see things in ways they might not have understood previously.

Great book. Not a lot of sex in this one. It’s there but it doesn’t take over the book. It feels natural and real. If you love romantic suspense, definitely check this one out!