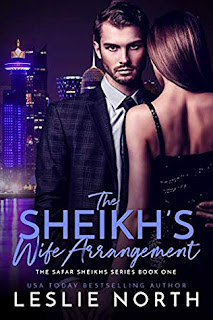 Goodreads synopsis:
Ancient law dictates that Sheikh Fatim Safar has to marry or be disinherited by his 30th birthday. Fatim isn’t worried—he married years earlier and had two children with his wife before she died. But there’s a catch: the law states he must be married at age 30. Two weeks from his 30th birthday, there’s no time to change it or fight it...it’s more expedient to marry.

Calla Clark is out to prove her parents wrong. Instead of marrying well like her mother wanted, Calla’s in the Middle East to prove her design prowess. And what better way to do that then becoming seamstress for the royal family and getting to drape fabric over the sexy Sheikh’s rock-hard body. She can’t act on her temptations, of course. She’s got goals to crush. Still, when she watches the way the Sheikh commands his tribe, and cares for his kids, she can’t help but feel an undeniable attraction.

Fatim has taken a liking to Calla, too. She’s smart, thoughtful, and good with his children. With his birthday right around the corner, Fatim offers her the position as his wife. It’s only temporary, and in return for marrying him and helping with his children, he’ll give her everything she needs for the upcoming Fashion Week. Calla agrees...so long as he helps keep her dream alive.

With so many differences between them, Fatim and Calla’s powerful pairing could raise the tribe up to modern heights, or send it to the bin like last season’s cast-offs.

This is the first book in the Safar Sheikhs series by Leslie North.

I picked this ARC up because I had recently read THE RANCHER’S SECOND CHANCE and really liked it. North was a co-author on that book so I figured I’d give it a try. It didn’t disappoint.

Basic premise: The Sheikh Fatam Safar is in a bind. With his previous wife deceased, he now won’t be married on his 30th birthday. Ancient law says he must give up the throne if he is not married upon his 30th birthday. It is a technicality but one they can’t over look. Calla is the royal seamstress and the Sheikh asks her to take over the nanny duties for a short time. Then later he brings out the big guns and says he wants her to be his wife just on paper. Make it look good to the public but not be real in any other way. A babysitter with benefits, so to speak.

This book was pretty short but I thought it was a good romance. You get that international flavor with the bit of suspense and surprise that some romantic suspense has. You can feel Calla’s dread upon making the decision to be the Sheikh’s wife and wondering how it will effect her aspiration as a fashion designer appearing in Fashion Week.

I really liked the epilogue the best. What a hoot that would have been watching the Sheikh on the runway at Fashion Week!

This book gives you all the feels. If you love contemporary romance, definitely check this one out.

I received this as an ARC (Advanced Reader Copy) in return for an honest review. I thank NetGalley, the publisher and the author for allowing me to read this title.
Posted by Toni at 9:58 AM