Tilling the Truth (A Garden Squad Mystery #2) by Julia Henry 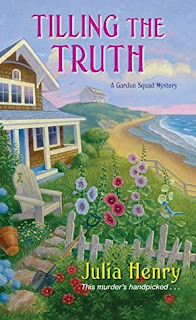 Tilling the Truth
(A Garden Squad Mystery #2)
by Julia Henry

Goodreads synopsis:
It’s August in Goosebush, Massachusetts, and go-getter retiree Lilly Jayne and her youthful senior pals show no sign of slowing down during the lazy days of summer. But when murder mows over a pesky local, could a Garden Squad member be nurturing a deadly second act?

While Lilly digs into a town beautification project, her friend Tamara O’Connor has greater concerns than well-pruned geraniums. The real-estate firm owner hasn’t been shy about blaming perennial grouch Gladys Preston for thwarting her many attempts to sell off a beautiful beachside property. But accusations fly when Gladys is suddenly found dead—and Tamara is caught standing over the body with a bloody weapon in her hand . . .

As Tamara becomes the prime murder suspect, Lilly and the Garden Squad ladies set out to prove that someone planted the evidence. With a potpourri of alarming clues scattered around Goosebush, cracking this case means confronting a calculating culprit with a penchant for cutting down anyone who gets in the way . .

This is the second book in the Garden Squad Mystery series by Julia Henry.

It seems like the retiree vibe is big in cozy mysteries right now. The book I read before this had a similar theme. There was a bit of a garden concept going on in that one as well.  Comparing this one to that, I felt the previous book did the mystery part of they story better. But I felt like this one did the friendships and the relationships better. That isn’t to say the mystery was bad. It wasn’t. It was a pretty good one. This is my first time reading a book in this series so I wasn’t as familiar with everything that was going on per say. I wasn’t sure who the permanent residents were as opposed to the people who were only here for this particular storyline. Not knowing made the mystery a bit harder to figure out. So, maybe not knowing was a good thing.

Basic premise: A group of ladies is meeting in order to organize what seemed to me was a dump site. A very organized dump site. Sort of half dump half recycled area. Donations everywhere but there is a method to their madness. One of the ladies, Tamara, came earlier and found the dead body of another in their group, Gladys. Gladys had been at odds with some people trying to sell off a specific beachfront property. And this kerfuffle lead to murder.

Tamara was found mere minutes after she found the body of Gladys holding onto an old rusted sink. The only reason the weapon was bloody as it says in the above synopsis was because she dropped the sink in the bloody pool around Gladys. This was after all the women found her standing over the body.

The normal gossip and innuendo surrounded much of the latter half of the book. This was merely to introduce us to all the players in the drama. I have to admit that I did get a tad confused from time to time remembering who was who. Maybe it was retiree brain. Two of these types of books in a row gave me what my Dad calls the CRS syndrome (can’t remember shit.). He blames this on being old. Not sure what my excuse is.

Overall this felt more like a good visit with a bunch of ladies you see at church every week and less like a mystery. The mystery was fine. Not bad at all in retrospect. But I think the winning part of this was the town and the feeling of how they interacted with one another. This alone is what will make people return to this series. Mysteries come and go but family and friends are forever. If you love hometown cozy mysteries with normal, regular people, this series is the butter to your homemade bread.

I received this as an ARC (Advanced Reader Copy) in return for an honest review. I thank NetGalley, the publisher and the author for allowing me to read this title.
Posted by Toni at 11:51 AM