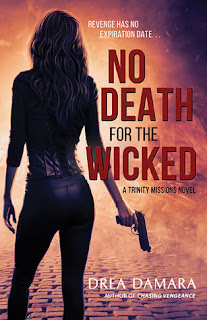 Goodreads synopsis:
Does revenge have an expiration date?

Broken hearted and bullet-ridden, agent Caria Milosc returns to work after the attack that nearly toppled the Trinity intelligence organization. As she digs deeper into her new mission, she uncovers secrets about her boss, leaving her with a moral dilemma—show mercy or taste revenge.

How long can one man cheat fate?

After a favor that nearly cost him his life, mercenary Ivan Skavinsk reunites with an underworld group he had infiltrated. Deep in the jungles of Bolivia he finds he may have pushed his vigilantism to the brink.

A gritty story of modern espionage and the complexities of the human spirit.

This is the second book in the Trinity missions series by Drea Damara.

If you are anything like me, you may need to read the first book in this series for a lot of the nuances of this book to make complete sense. I always felt like I was a step behind while reading this. All the foreign names threw me off in the beginning. I had a hard time remembering who was who. There came a point where it was down to just Carla and Ivan and after that, the story just flew. I have to admit that I almost gave up on this book. I wanted to put it down so many times. But I pushed through. This book could be 75 pages shorter and it wouldn’t take away from its impact.

I didn’t really see the point of the beginning half of the book,  most of it was just the author letting us know who was who and what the entire set up was. There were some great character revelations here that almost seemed to fall a bit flat upon the revealing of them.

The end does leave us hanging a bit which I assume means there will be another book in this series.

If you like spy guys, spies and just espionage in general, definitely check this book out. It will be just your speed. It was just okay for me.