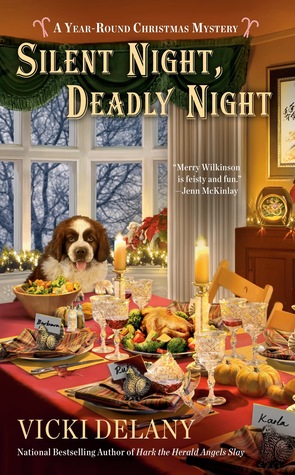 Vicki Delany
Residents of Rudolph keep the spirit of Christmas alive year-round—but their joy is threatened when a group of grinches visits the town, in the charming fourth installment of the Year-Round Christmas series.

It's the week before Thanksgiving, and Merry Wilkinson, owner of Mrs. Claus's Treasures, is preparing for a weekend reunion of her mother's college friends. But when the group of women comes into Merry's shop, Merry is met with frosty attitudes and cold hearts.

The women argue amongst themselves constantly, and the bickering only intensifies after one of the friends is poisoned. With her father's role as Santa in danger due to his proximity to the crime, Merry will need to use all of her investigative gifts to wrap this mystery up and save Santa and her favorite holiday.
Kindle Edition, 304 pages
Published August 27th 2019 by Berkley

This is the fourth book in the A Year-Round Christmas Mystery series by Vicki Delany.

This is one of those books that grows on you over time. There seemed to be way too many characters at the beginning between those at Merry's shop, different shop owners and the plethora of guests her parents were hosting at their house. The lead up to the death of the friend of Merry's mother seemed a too long and I was losing interest so quickly I feared that I would put it down if something didn't happen soon.

Once the whole situation with her father's job as Santa being threatened by a guy who could only be described as the Grinch, the book turned a corner. I knew from that point on I would be able to make it to the end.

I found the guests being trapped at her mother's house a bit too convenient for my taste. Not too many people I know would have a house so big it could be converted into an instant bed and breakfast.

This wasn't my favorite cozy mystery. It was okay. Decent. The mystery was solved at the end through leaps of logic the main character didn't share with us, the reader. I came away unsatisfied that I didn't get my own ah-ha moment when I figured it all out. At the end I was more relieved it was over. Having so many people in one place and in so many scenes was almost overwhelming to me. I was glad when they all vacated and went home.

I wish the detective lady would have been more open. I felt like she was more enigma that anything. I never felt like I had gotten to know her by the end. It would be nice to expand her part a bit. Get more of a glimpse into her life.

I might just be feeling like this since I hadn't read a book in this series previously. I felt so behind without enough of the relevant backstory.

If you like cozy mysteries, definitely check this out and choose for yourself.

I received this as an ARC in return for an honest review. I thank NetGalley, the publisher and author for allowing me to read this title.
Posted by Toni at 12:03 PM