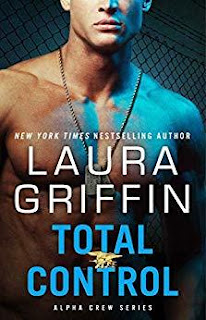 Goodreads synopsis:
The New York Times bestselling author of Desperate Girls and Touch of Red returns to her sizzling Alpha Crew series with this fourth thriller filled with “scorching-hot chemistry” (Kirkus Reviews) featuring a Navy SEAL who meets his match in a fierce FBI agent as they work together to take down a dangerous terrorist.

Navy SEAL Jake Heath has his eyes on Alexa Mays. The FBI Agent is whip smart and hot as hell, but she won’t give him the time of day. So, when she calls him out of blue, he thinks his luck has changed.

But instead of meeting up for a romantic dinner, Alexa needs Jake for a very different reason. Her counterterrorism team is hot on the heels of the extremist that Jake’s task force has been tracking for months, and now he’s on American soil. The only way she can take him down is with Jake’s help.

Alexa knows Jake is tough and relentless...and that the chemistry between them is electric. Although she’s risking her heart—and maybe even her career—by bringing him onto the mission, she doesn’t have another choice. Together, they’re an unstoppable and powerful team.

As the hours tick by and a lethal enemy gets closer to launching an unimaginable attack, Alexa and Jake need to fight fire with fire before the clock runs out. The only question is: will their own flames get in the way?

This is the fourth book in the Alpha Crew series by Laura Griffin.

Alexa is playing against the rules. She isn’t supposed to include Jake Heath in her operation.  I was a bit unclear as so why it was such a no-no. Something about someone not supposed to be working to capture terrorists on American soil.

The two both knew of each other previously and lusted after each other but had never gotten together to date. Not sure why considering their instant attraction.

At first the camping trip Jake skips seems almost like his father wanted one more family outing before he died but I think I read too much into the encounter. Jake brushed it off pretty easily once he decided to take Alexa up on her offer.

I felt like this book was too short. I am used to the longer Griffin novels and I didn’t get as much detail about the situation before they were closing in on the suspect.

There was a scene near the end where I flashed back to another Griffin novel where the perp was also traced to a mall. For a second I wondered if I had already read this book but then realized it wasn’t the same story. Just the same flavor. I felt like the wrap up was too quick as well. I was ready to be invested for the long haul and before I knew it, it was over. I would consider this novella length instead of novel length. But the length doesn’t make me love it any less.

Griffin has a great way of making us fall not just in love with her characters but with the story situation as well. She knows how to write romantic suspense like it’s her job… okay, well, it is, but you know what I mean.

This is one short book you won’t want to pass up.