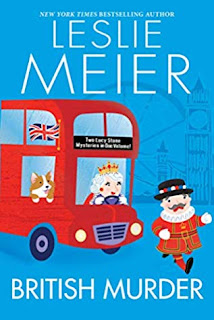 English Tea Murder #17
Between a busy family and her duties as a reporter for the Tinker's Cove Pennysaver, Lucy Stone could use a break. So when a friend tells her about a trip to England sponsored by Winchester College, she jumps at the chance for a girls getaway. But when tour leader Professor George Temple dies mid-flight after an asthma attack, Lucy's glad she packed her sleuthing skills. . .

In London, Professor Quentin Rea, a ladies' man and former flirt of Lucy's, arrives to take over the tour—and she finds that while his hairline has receded, his amorous intentions have not. Lucy also begins to notice peculiar behavior among other members of the group. And when she discovers all of them have pasts connected to the late Professor Temple, she suspects his death was an elaborate act of revenge. Then another tour member dies, and Lucy is suddenly ensnared in a daring scheme that could lead her to a mastermind of murder—or make her the next victim. . .

British Manor Murder #23
It’s a nippy spring in Tinker’s Cove, Maine, and so Lucy Stone can’t wait to join her friend Sue at the Earl of Wickham’s manor in England for the “Heads Up!” hat exhibition—even if she has to spend her entire holiday curtseying. But at Moreton Manor, privileged life isn’t always tea and crumpets . . .

Although Perry, the earl of the house, and his sister, Poppy, are surprisingly accommodating to their jet-lagged guests, Lucy feels uneasy after a fallen portrait sparks talk of a deadly family omen. The bad vibes come in quickly—snobby Aunt Millicent and her handmaiden Harrison unexpectedly drop by for the exhibition, and meals with the family are consistently tense. But real trouble begins when a body, bludgeoned by the chapel’s gold-plated reliquary, is found in a hidden, sealed off room. Stranger still, the corpse is identified as Harrison’s son, Cyril.

Considering the weapon and the clandestine location, Lucy wouldn’t be shocked if the murder was an inside job. Cyril wasn’t exactly a gentleman, and it’s unclear what business he had on the property. Was the victim trying to make off with the family riches before meeting his end? Or was a scorned country squire looking to settle an ancient indiscretion for good? One thing’s for sure—the criminal is privy to Moreton Manor secrets . . .

To end the reign of terror, Lucy must keep her ear to the ground and mind time-honored traditions—no matter how unusual. Because Lucy has a hunch that the killer has been in her company all along, just waiting for a chance to make blueblood run red . . .

This is the seventeenth book in the Lucy Stone mystery series by Leslie Meier.

This book gives homage to one of the world’s most popular mystery writers, Agatha Christie. And in true Christie fashion, an American group going on a tour in London has a mysterious death during the plane ride to England. Their tour guide has trouble breathing and succumbs to anaphylactic shock due to a peanut allergy and dies. Lucy wonders if this death is more than it seems but the thought is pushed quickly out of her mind as she begins to enjoy the wonders of London. Mysterious accidents keep happening throughout the book and Lucy revisits her initial pondering about Tour Guide Temple’s death.

When you get to the end of this you will be in awe at how this book is a wonderful nod to Agatha Christie and done quite well, in my opinion. I enjoyed seeing all the sites of London while getting to know all the tour guide participants and wondering how this motley crew ever came together to begin with. Great fast read. And the mystery really keeps you on your toes too.

This is the twenty-third book in the Lucy Stone series by Leslie Meier.

It was really cool to read these two books together. Having British Manor Murder right on the heels of English Tea Murder made so much sense! Just loving Lucy and her exploits the more I read through the series.

Lucy has traveled again to England with her friend Sue to visit the manor of an Earl who is having a hat show. When a dead body is found in a hidden room on the estate, Lucy finds the residents more than uneasy and then the corpse is identified as the son of the handmaiden of the Earl’s odd Auntie Millicent. But there are no tears for Carl or the tattooed man who was found dead in the maze. What exactly is going on here? This is a question I continually asked myself.

Great mystery and setting. Love these trips to England. I wonder if there are more than these two in the Meier collection of Lucy Stone stories. I will definitely have to check it out! Intrigued all the way through, for sure!