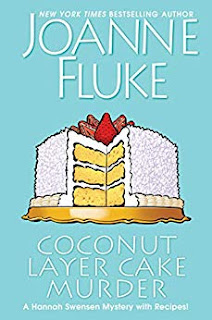 Goodreads synopsis:
Bakery owner Hannah Swensen is leaving Lake Eden to help a friend in sunny California. But an unexpected phone call swiftly brings her back to a cold Minnesota winter . . . and murder . . .

When Hannah learns that her sister Michelle’s boyfriend, Detective Lonnie Murphy, is the prime suspect in a murder case, she goes straight from a movie studio sound stage to the Los Angeles airport.

Back in frigid Minnesota, she discovers that proving Lonnie’s innocence will be harder than figuring out what went wrong with a recipe. Lonnie remembers only parts of the night he went out to a local bar and ended up driving a very impaired woman home. He knows he helped her to her bedroom, but he doesn’t recall anything else until he woke up on her couch the following morning. When he went to the bedroom to check on her, he was shocked to discover she was dead.

Hannah doesn’t know what to believe—only that exonerating a suspect who can’t remember is almost impossible, especially since Lonnie’s brother, Detective Rick Murphy, and Lonnie’s partner, Chief Detective Mike Kingston, have been taken off the case. Before everything comes crashing down on Lonnie like a heaping slice of coconut layer cake, it’ll be up to Hannah to rack up enough clues to toast a flaky killer . . .

This is the twenty-fifth book in the Hannah Swensen Cookie Jar series by Joanne Fluke.

Wow! Can you believe we have hit the twenty-fifth book? So much yummy goodness in this banner foodie cozy mystery series. It is the forerunner in my mind that helped the cozy genre take off to new heights.

This book feels a little different than the rest. There is a whole section or two where Lonnie is the main character and we are seeing the action through his eyes. That seemed a new feature to me. Plus, we got to see Norman in a whole new light. We see his house and we get a feel for who he is and what he wants in his future. We all know both Mike and Norman love Hannah but here we get to see into their minds and know more about what they truly are thinking. I liked that aspect. Gave me a whole new aspect for the series and what I’d like to see more of in the future.

I was sorry to see Michelle taking a step back but having Angela back and helping Hannah was great! And then Delores being starstruck in California was just a hoot and a half.

As I followed along the mystery I kept fearing Lonnie may have done it after all. Of course, I didn’t want to believe it but as Hannah investigated and cleared so many suspects, I began to think the worse.

I am not going to tell you whodunit because that would ruin the entire story. So dive in and read this for yourself. Great book that I loved getting to know again.

Love this series. It is one of my guilty pleasure reads, for sure!