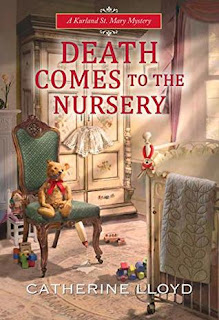 Goodreads synopsis:
Delighted by the quiet uproar of raising their newborn, Lady Lucy and Major Sir Robert Kurland could not be more pleased at the prospect of welcoming another into their home. But their preparations are soon overshadowed by a baffling case of murder . . .

Once known to all in her village as the rector’s daughter, Lucy is now a mother herself—to a wonderful eighteen-month-old son, Ned. Upon discovering that she is expecting a second child, Lucy and Robert are delighted. In anticipation of the new arrival, Lucy is set on expanding her nursery staff. When Agnes, her current nurse, recommends her cousin, it seems like the perfect solution.

But trouble arrives along with the new nursery maid from London. Polly’s flirtations provoke fisticuffs in the servants’ hall and tumult in the village tavern, and on her afternoon off, she fails to return to the Kurland Estate. When a farmer finds her lifeless body in a drainage ditch, Lucy and Robert fear foul play.

To their consternation, they learn their new nursery maid was not who they thought. As Lucy’s sister Anna leaves the rectory and moves in to watch over Ned, the couple’s search for the truth leads them to the London theater world, where aristocrats purchase their mistresses, and into danger. But the real threat strikes all too close to home . . .

This is the seventh book in the Kurland St. Mary mystery series by Catherine Lloyd.

Just when I think I have heard of every cozy mystery series in existence, another great one pops up and lands at my feet.

I can’t believe they have gotten to book seven before I’ve ever even heard of this series. What a little gem this is. It wasn’t just the main characters that capture your attention in this; it is the whole community of people.

Basic premise is that a young woman comes to town to work in Lucy’s nursery staff. She isn’t all that she appears, unfortunately. She is quite a beauty and the men are falling all over themselves to gain her favor but she ignores them. Then she ends up dead in a ditch and one of the men of the manor is bludgeoned and dumped at his family’s estate. Lucy and her husband investigate who exactly this woman was and why she would end up dead.

Based on the title, I feared the dead body might have been found in the nursery and I was happy to see that misconception was wrong.

I think I was entranced by the setting just as much as the mystery in this one. Great story that keeps you guessing until the very end.