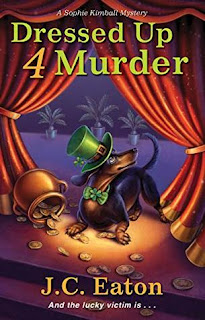 Goodreads synopsis:
Last one standing is the winner . . .

The holiday season has arrived and bookkeeper/amateur sleuth, Sophie “Phee” Kimball, would love nothing more than to enjoy the comforts of her new home with her detective boyfriend near Arizona’s Sun City West. Instead, her mother Harriet wants to showcase her chiweenie-chihuahua-dachshund Streetman in the Precious Pooches Holiday Extravaganza costume events. The festivities begin in October and end on St. Patrick’s Day—with the winner starring in the St. Pat’s Day parade. But things quickly turn an awful shade of green when Streetman uncovers a dead body under a tarp-covered grill in the neighbor’s yard.

The victim is Cameron Tully, a seafood distributor working out of Phoenix, who died from ingesting a toxic sago palm leaf. Before the police can even find a motive and suspect, another Precious Pooch owner nearly dies from the same poison. With Harriet believing someone’s targeting her and Streetman because of the costume contests, Phee will need a potful of Irish luck to sniff out a killer . . .

This is the sixth book in the Sophie Kimball mystery series by J.C. Eaton.

What a hoot this was! Sophie’s mother, Harriett and her little doggie Streetman find a dead body underneath the grill at her neighbor’s house. The neighbors are snowbirds and currently out of town. Harriett is keeping an eye on their house for them. She pulls her daughter in to investigate so she can focus on her dog show priorities. Her goal is to win the trifecta of dog shows so she and Streetman can win a sweet prize.

It was funny reading this at times. Ironic funny. The cops and Phee would have the clue right in hand and then would discard the idea, move to a different theory and then later come back with a “DOH!” look on their faces.

The extremes to which Phee’s mother is so obsessed with her dog says a lot about why Phee keeps trying to distance herself from her mother and the book club girls.

The mystery in this is multi-layered and was sometimes a bit of a mind bender trying to figure out which aspect of the investigation they were trying to solve.

I enjoyed the heck out of this and look forward to other books in this series!

I received this as an ARC (Advanced Reader Copy) in return for an honest review. I thank NetGalley, the publisher and the author for allowing me to read this title
Posted by Toni at 9:47 AM