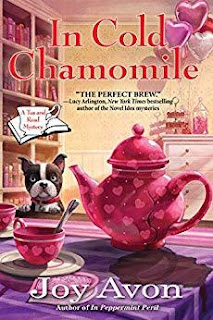 Goodreads synopsis:
Just in time for the holidays, In Cold Chamomile is sure to be a cupid's arrow aimed straight for your bookshelf.

Tea party organizer Callie Aspen learns that Cupid's arrows can be deadly when a Valentine's Day soiree ends in murder.

Callie Aspen can't think of a more appropriate place to spend Valentine's Day than her adopted hometown of Heart's Harbor, Maine. When she's not helping out at Book Tea, her great-aunt Iphy's vintage tearoom, Callie's adorning Haywood Hall with hearts and roses for the big Valentine's event, where townspeople will fall in love with sweet treats, heartwarming music, and delightful books. But tension is brewing: The librarian argues with the expert who is on hand to appraise precious volumes. And Iphy is shocked to recognize the baritone who's slated to sing at the event as an old acquaintance--one she'd hoped she'd never meet again. And then, when a dead body is discovered, the stirring spoon of suspicion points at the many people who had reasons to want the victim dead.

When Iphy's old acquaintance draws the attention of Deputy Ace Falk, Callie finds herself in a spot. Ace, as usual, doesn't want Callie involved, but how can she ignore Iphy's anguish over the fate of a man she cares for more than she will admit? Bringing the killer to justice may endanger Callie's budding relationship with Ace--and, quite possibly, her own life.

Callie and the Book Tea crew may think they have this case in the bag, but un-kettling truths are yet to be decanted.

This is the third book in the Tea and Read Mystery series by Joy Avon.

I really enjoyed this book. The suspense was good, the mystery complex but the ending was not my favorite. I am more of a happily ever after reader. I want it all to work out in the end. And in a way it did, but just not for a certain character. Crestfallen and disappointed were the words that came to mind when finishing this. I hope they can tie it all up nicely in the next installment. I really want my happily ever after scenario fulfilled.

Basic premise: A man comes to town to judge antiques brought in by locals as part of a charity event hosted at Haywood Hall. Also, a stunningly handsome older gentleman, a baritone, comes to town in place of a different man, who has ties to Callie’s Aunt Iphy. Then the antique’s guy is murdered and now Iphy is trying to prove that her old flame, the sweet singing man, is not a murderer.

The mystery and whodunit was dead on. I had no clue who the suspects could have been. Every time I decided I had the killer in sight, the person would be cleared. By the end I still hadn’t fingered the correct person and even Iphy, who had come to her own conclusion wasn’t completely correct in her theory which made me feel somewhat better. The twist at the end in that respect was very nice. The ending I didn’t like was concerning relationships and connections. I don’t want to give away too much here. Just read this and be entertained. Maybe we can lament our character concerns over a beverage at Book Tea once you get to the end.

If you love a good cozy mystery check this one out. You won’t be disappointed.

I received this as an ARC (Advanced Reader Copy) in return for an honest review. I thank NetGalley, the publisher and the author for allowing me to read this title.
Posted by Toni at 11:52 AM