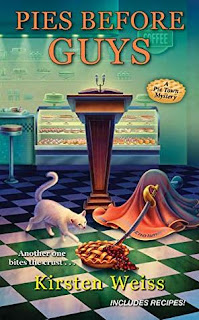 A poetry slam at a bakery? Why not! Even though Pie Town proprietor Val Harris would rather be spending time with her newfound half-brother, she knows her employee, Abril, is beyond excited to be hosting the event. Especially since it stars the apple pie of Abril’s eye, poet and professor Michael Starke. But the evening ends on a sour note when Professor Starke is found murdered mere moments after being accused of plagiarism.

Just like that, Pie Town is at the center of another criminal inquiry. At Abril’s request—and much to Detective Carmichael’s consternation—Val and Charlene decide to investigate Starke’s death. But the case is as tough as an overworked crust and the Baker Street Bakers are only coming up with scraps. If they don’t pinch the cultured killer soon, Pie Town’s reputation could crumble.

This is the fourth book in the Pie Town Mystery series by Kirsten Weiss.

Basic premise: A local professor is found dead after reading poetry at a poetry slam put on at the Pie Town Bakery. As soon as the body was discovered the suspect list just kept growing in leaps and bounds. Val reluctantly puts the Baker Street Bakers back into the mystery solving business, much to Detective Carmichael’s dismay.

There was all kinds of gooey goodness in this story. The characters were amazing. So fully formed it felt like I was reading about our neighbor’s exploits instead of reading a book. Even the cat had a quirky disposition.

I have to admit that the mystery was so good that when the killer was finally revealed, I was stunned. I didn’t even have that person on my suspect list. Figures! This series just keeps getting better and better and I look forward to each release as they come out.

If you haven’t read this series, might I suggest you start from the beginning. Let the atmosphere enfold you into the Pie Town goodness. You won’t regret it.

I received this as an ARC (Advanced Reader Copy) in return for an honest review. I thank NetGalley, the publisher and the author for allowing me to read this title.
Posted by Toni at 10:10 AM