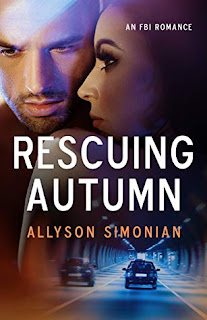 Goodreads synopsis:
Camden Taylor is an FBI agent, working undercover in an outlaw motorcycle club. When the brothers kidnap a rival from another club, Camden has no choice but to blow his cover in order to save the man's life.

Autumn Mason has lived with Butch Cobb, president of Wicked Disciples, for nearly five years. Butch is terrifying—as abusive as he is powerful—and there is no escaping him. But when Autumn witnesses Camden being beaten and held prisoner, she is forced to make a desperate decision. Will she choose to be loyal, or will she do what she knows is right?

Please note: This book was originally published by Kindle Press as Meeting Danger. The series' authors have split the series, each taking ownership for one title.

This is the first book in the A FBI Romance series by Allyson Simonian.

I am not certain if this is going to be a series but since it was labeled “An FBI Romance” I am going to assume so. Looks like it used to be part of a bundle where multiple authors put a story into one large volume. Now it has been busted apart and each story is now its own individual book.

Basic premise: Autumn has had a hard life. She never attended school, she didn’t know how to read and her brother left her with a much older man who was a drug runner /gang member and an all over bad guy. Camden Taylor is working undercover at the FBI trying to uncover trying to infiltrate the Wicked Disciples. Autumn saves his life after his cover is blown and he takes her to the protection of his grandparent’s farm.

I thought this was a great story. Even though there are bits of romance in this, it felt more like a suspense or thriller story with a dash of happily ever after added in for good measure. Romantic suspense would fit the bill for this title, more suspense than romance, however.  It is the type of book that really keeps you on your toes. Loads of tension and awfulness. You wonder how people can survive such abuse and begin to think people’s bad treatment of them is normal.

This book also felt like a bit of a police procedural as Cam and his FBI roommate Martin were digging into the details of this gang, Wicked Disciples. At the same time Cam befriends an inmate during his undercover stint in the prison he believes to be innocent and he begins looking into his case at the same time as all the gang related nonsense connected to Autumn.

There seems from this description that there would be a lot of downtime in this book but there really wasn’t. I enjoyed the classic boy meets girl, boy loses girl, boy gets girl and they live happily ever after. The chase after the killer(s) was thrilling and I kept wondering if Cam would ever find Autumn after she disappeared to St. Louis looking for her brother.

If this book is indeed a series, I hope the author makes her next main character, Martin, Cam’s roommate and co-worker in the FBI. He has all sorts of posibilities surrounding him, I think.

If you love a good romantic suspense, definitely check this one out. You won’t be disappointed.

I received this as an ARC (Advanced Reader Copy) in return for an honest review. I thank NetGalley, the publisher and the author for allowing me to read this title.
Posted by Toni at 8:40 AM